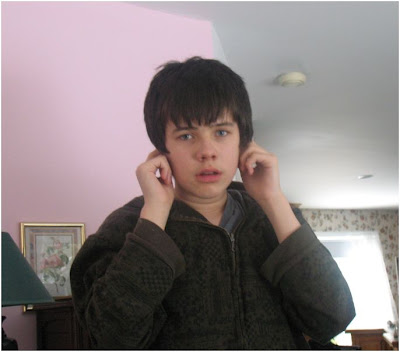 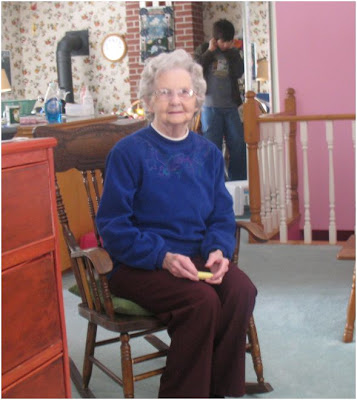 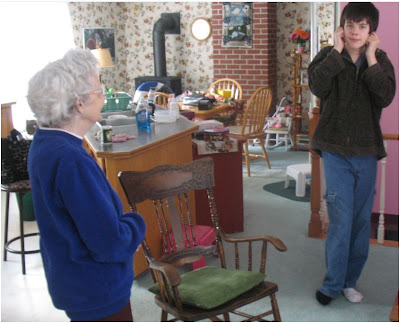 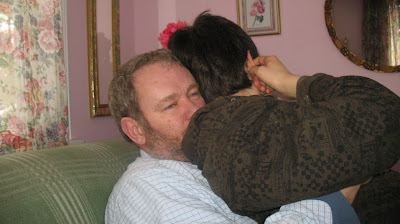 Autistic Disorder is a disorder. In the pictures above Conor, who has Autistic Disorder, exhibits some of the behavior which, in the real world, if not in the ideological world of Neurodiversity and ASAN advocates, is a deficit. Conor has throughout his life enjoyed visits with Grammy and Grampy in Nova Scotia, and with his Nanny in nearby Douglas, New Brunswick. In the past couple of years though Conor, while asking to visit Grammy and Grampy and Nanny, usually has great difficulty once he arrives. He gets overexcited and withdraws; closing his eyes and plugging his ears.
In the sometimes topsy turvy world of autism discussions debates rage on over such inane issues as whether autism is in fact a medical disorder or a socially created construct of an intolerant society. As the parent of a 13 year old boy with Autistic Disorder I think the social model of autism is pure, unadulterated nonsense.

In the pictures above Conor, who loves his Nanny, covers his ears and curls up with Dad for comfort during a visit to Nanny's this past weekened. The occasion was a visit by his uncle Bill and cousin Ben from Nova Scotia. Conor's Mom stayed for several hours but I took Conor home after 15 minutes because of his discomfort. Conor's autistic disorder prevented him from spending time with family members whose company he has enjoyed in the past.

For me, and for Conor, autistic disorder is a real disorder not a social construct.

We certainly don't agree on everything, and I have sometimes been frustrated by your skepticism.

But I appreciate your continuing posts showing how autistic disorder is real, and a set of deficits for those affected by it.

I also very much appreciate your interest in showing that the vaccine/autism link has a great deal of hard, scientific evidence behind it (even if you remain "agnostic" at this point).

Those who are unwilling to look at it further often show themselves to be illogical and personal in their arguments, and unwilling to see that vaccines are harmful to some.

We can't be afraid of the truth, even if it's unpleasant and difficult and leaves us between a rock and a hard place.

The picture of "Nanny" facing Connor is probably the most poignant image I have ever come across. Here is a woman who is obviously enamoured of her grandson, standing quietly and with an open heart waiting for him. It's the picture of perfect acceptance. How much more proof does one need to know that the social disability construct is false, when a child faced with such perfection is *unable* to partake of it fully?

Thank you for sharing this private moment with us. Claire is right; that is an incredibly poignant picture.

The unconditional love of a grand-parent is truly a special gift.

Hypersensitive hearing could be painful and is often exacerbated in puberty.Also,Hyposensitivity or hypersensitivity due to sensory processing challenges may affect how a person on the spectrum handles intimacy.

Covering the ears when certain sounds are heard is an obvious clue.Hypersensitive hearing is a common sign of magnesium deficiency,simply supplementing the diet with magnesium should be the first priority.Seeking further assistance from a reputable bio-medical doctor for further inquiries is recommended.

If magnesium supplements do not correct the hypersensitive hearing in a few days,ear plugs,purchased at drugstores or hardware stores,may be helpful. Berard-type auditory integration training(AIT) is often helpful for hypersensitive hearing and many other problems common in children and adolescents with autism.

For a review on the research on Berard auditory integration training go to www.sait.org

Hope this information is useful.