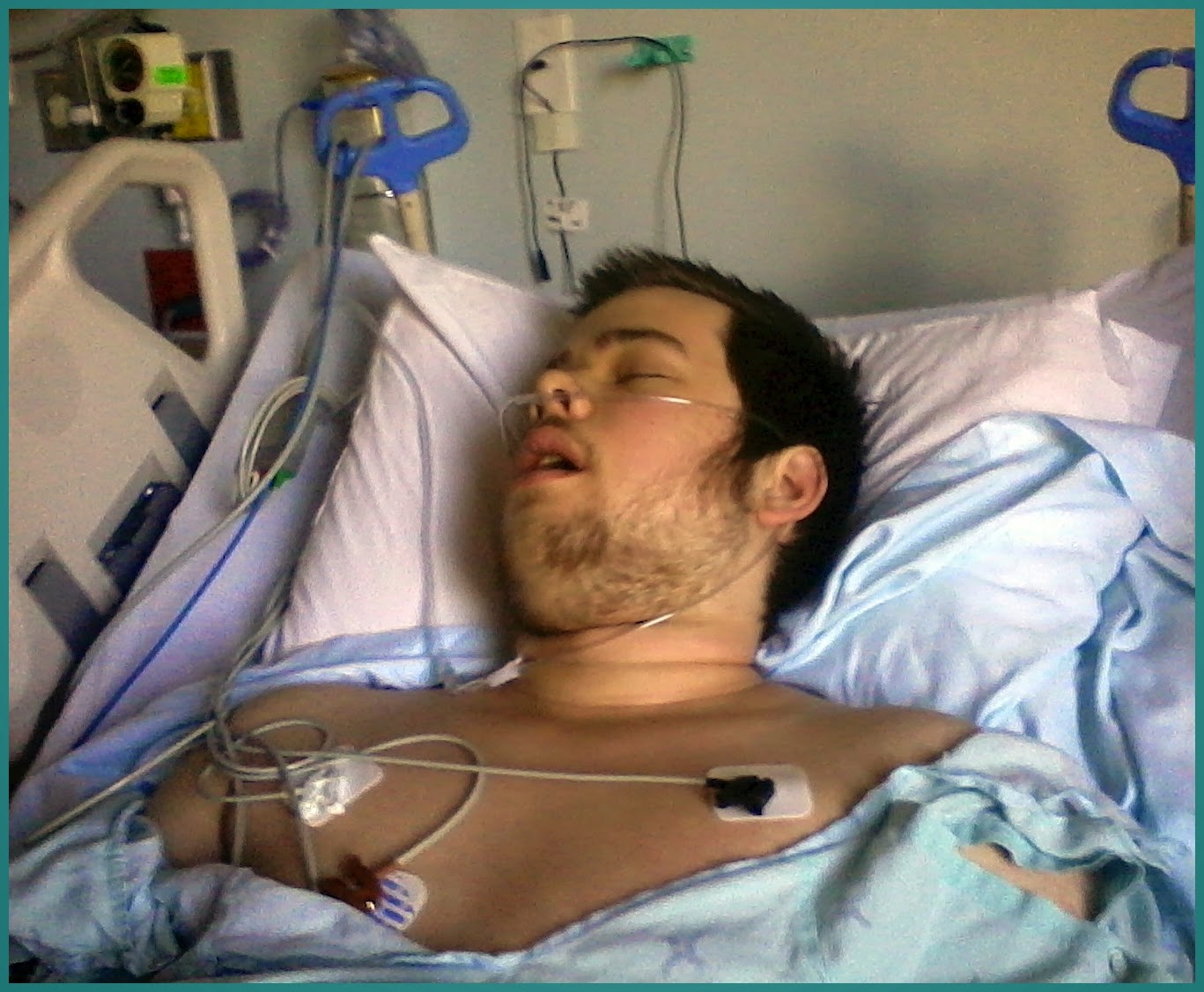 The newsletter that follows reports on 4 studies of the autism-epilepsy connection.   It is a connection which our own son Conor has lived with and which has presented serious challenges.

Conor received an autism disorder diagnosis the day after his 2nd birthday 17 years ago.  We have been focused on his autism ever since but we were not initially aware that because of his autism disorder he might also be at greater risk of epilepsy as set out in the following report reviewing 4 studies of the autism-epilepsy connecction.

We began to suspect seizure activity when Conor entered adolescence.  He seemed to be "absent" and would look away staring at nothing at times. Later he started showing periods of hitting his head as though he was in pain.  Eventually he started suffering tonic clonic (grand mal) seizures, collapsing and convulsing.

In the picture above Conor is shown during his 6 day stay in the  Intensive Care Unit of the Chalmers Hospital in Fredericton treating what was determined after testing to be  rhabdomyolysis,  a serious reaction to Lamotrogine, his seizure medication at that time.

Rhabdomyolysis is the breakdown of muscle tissue that leads to the release of muscle fiber contents into the blood. These substances are harmful to the kidney and often cause kidney damage

Four studies presented at the American Epilepsy Society’s recent Annual Meeting delve deeper into this relationship, revealing biological mechanisms and clinical findings that could help advance treatments for patients with both disorders.

Jennifer Avallone, DO, and colleagues retrospectively examined the video EEG findings and clinical records of 53 children and adults diagnosed with both epilepsy and ASD. The authors uncovered abnormal video EEG findings in 50 of the 53 records studied. Clinical and EEG records indicated that 40% of the patients had focal epilepsy, 30% had generalized epilepsy, 25% had both focal and generalized epilepsy and 5% had an unclear diagnosis.  During the period between seizures, subclinical epileptiform activity occurred in 85% of the studies, while non-epileptic abnormalities in EEG activity were observed in 40% of the studies.

“The presence of epilepsy is an important finding in patients with autism spectrum disorder,” says Dr. Avallone. “Exploring the variations in EEG activity between and during seizures, and how those variations relate to genetic and behavioral findings in people with ASD, could greatly assist with the management of both conditions.”

In a second study, Andrey Mazarati, MD, PhD, and colleagues investigate the relationship between autism-like behavior and epilepsy associated with maternal infection.  Previous animal studies have potentially linked epilepsy and autism by showing that immune activation in a pregnant mouse can trigger two immune molecules – interleukin-6 (IL-6) and interleukin-1ß (IL-1ß) – in the offspring, thereby exacerbating the faulty signal transmission through an area of the brain known as the hippocampus.

The authors explored whether epilepsy and ASD might occur concurrently in another established mouse model of epilepsy known as the intrahippocampal kainic acid model. Surprisingly, the authors report fewer seizures in mouse offspring that displayed autism-like behavior and had IL-6 activation. At the same time, more severe epilepsy was observed in mouse offspring with the over-production of both IL-6 and IL-1ß.  According to the authors, the mouse model reveals evidence for a rivalry, rather than cooperation, between autism- and epilepsy-like features in certain circumstances.

“These observations suggest that the processes contributing to the autism-epilepsy connection are highly complex,” says Dr. Mazarati. “Studies exploring the relationship between autism and epilepsy must take this complexity into account when establishing a proper experimental design.”

A third study by Mirret El-Hagrassy, MD, and colleagues explore the neurological, physical, and behavioral characteristics of patients diagnosed with ASD, epilepsy and a rare condition known as electrical status epilepticus of slow wave sleep (ESES) that develops in childhood. ESES is marked by neurological/psychological impairment, motor delays, epilepsy, and finding electrical status epilepticus during slow wave sleep on EEG.

The authors analyzed retrospective data from forty-four patients with ESES who underwent video EEG monitoring and were treated with high doses of diazepam during the night to regulate brain activity. Out of those forty-four patients, six had ASD. All ASD patients had communication difficulties, and seemed more likely than the ESES patients without ASD to have language and reading learning disabilities. Four of the ASD patients had normal brain MRIs, but most were done years earlier. EEG seemed to show some differences in spike locations in the ASD group compared to the group without ASD, the authors report. Overall, both groups largely improved after diazepam with regard to seizure control and neurocognitive status, but comparison between the two groups was difficult.

“ASD can be associated with focal epilepsy, ESES, and multiple neurocognitive comorbidities. Spike locations during ESES in patients with ASD appear to vary on initial analysis from those with ESES but no ASD. Comorbidities also vary between the 2 groups. These differences are difficult to interpret with such small numbers, but may potentially render clues to cortical areas involved in different comorbidities of ASD and ESES, even when imaging is normal. Spike suppression may have implications beyond seizure control,” notes Dr. El-Hagrassy. “Further multicenter prospective studies are needed.”

In a fourth study, Megan Leigh Lewis, PhD Candidate supervised by Dr. Quentin J. Pittman at the Hotchkiss Brain Institute in Calgary, and colleagues unveiled a new mouse model of ASD and epilepsy to explore the underlying processes that contribute to the ASD-epilepsy relationship. To create the animal model, the authors inbred mice that display three behavioral characteristics of ASD – impaired social interactions, unusual vocalizations and repetitive stereotyped behaviors – and provoked an immune response in the newborn mice that has been shown to boost brain excitability in other rodents.

The mice were later examined for their susceptibility to seizures, their brain activity on EEG, and key ASD-like behaviors. The study confirmed that a single immune challenge in infancy increases brain excitability, and enhances seizure susceptibility and is associated with aberrant EEG activity in adult mice. The study further found that ASD-like behaviors are maintained in adult mice that received the early immune challenge, but not in unchallenged control mice.“This innovative mouse model could provide a useful tool to discover the molecular processes responsible for the co-existence of ASD and epilepsy,” says Lewis.

About Epilepsy
The epilepsies affect 50 million people worldwide, including three million in the United States. The disorder can have a single specific, well-defined cause, such as a head injury, or manifest as a syndrome with a complex of symptoms. It is the third most common neurological disorder after Alzheimer’s disease and stroke.

About the American Epilepsy Society
The American Epilepsy Society is a medical and scientific society whose members are professionals from private practice, academia and government engaged in both research and clinical care for people with epilepsy. For more than 75 years, AES has been unlocking the potential of the clinical and research community by creating a dynamic global forum where professionals can share, learn and grow. AES champions the use of sound science and clinical care through the exchange of knowledge, by providing education and by furthering the advancement of the profession. For additional information, visit aesnet.org.

Thank you for this informative article! Very interesting! Hope all is well with Connor....you are a great father.

Thank you for your kind words Kim. They mean a lot coming from you. You have been a leader in creating awareness of the real challenges facing many with severe autism, self injury and seizures. I wish you and your family the very best.