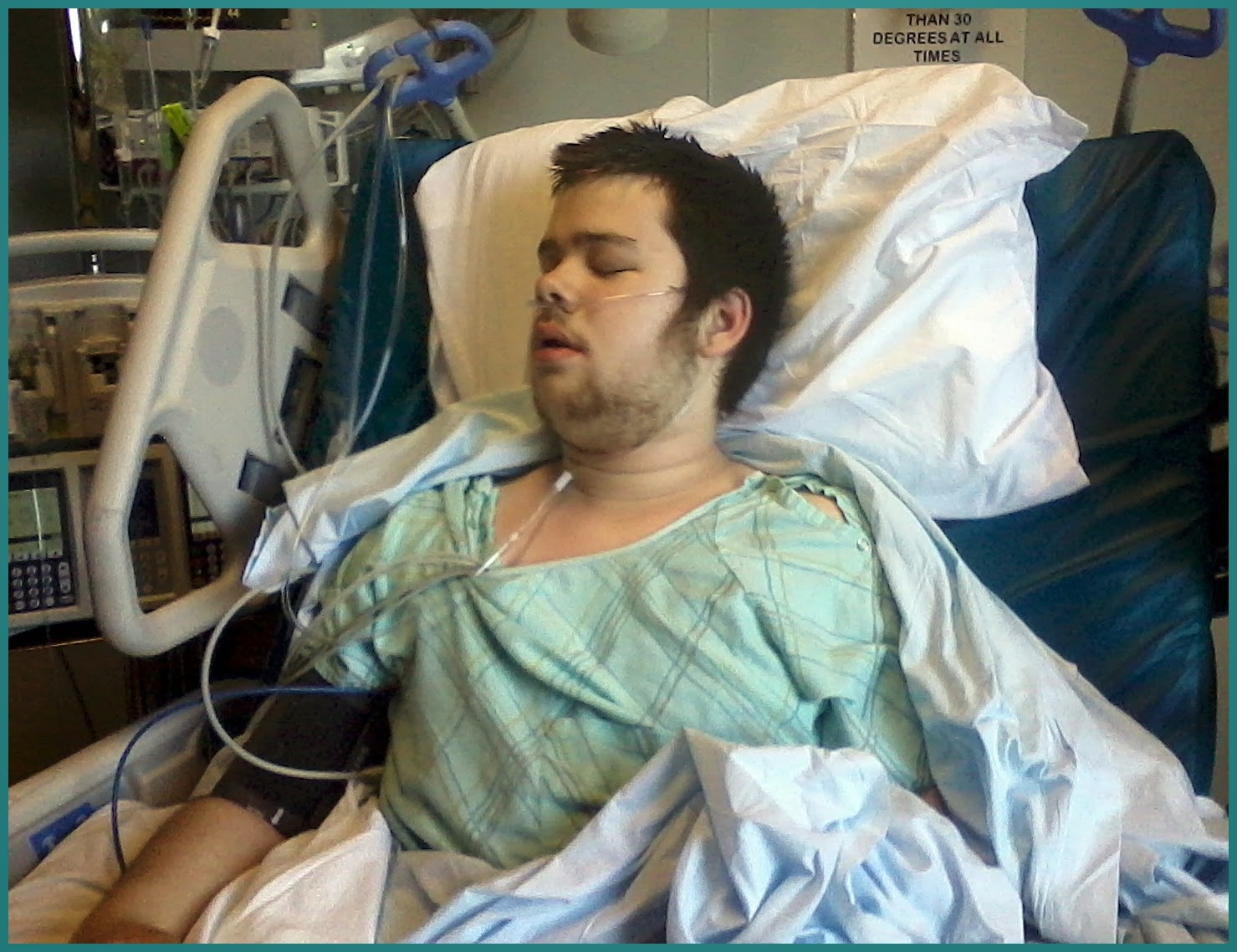 Conor  a year ago at the local ICU where he stayed for 6 days while the ICU professionals worked to save his life and return him to us in good health after a serious adverse reaction to his seizure medications.  Other parents of children with severe autism disorders and intellectual disabilities should be made aware that their children are at very substantial risk of seizure activity particularly with the onset of adolescence.  We didn't know these well established relationships with any certainty until our son started experiencing them.

April 2 will be another World Autism Awareness Day in which the harsh realities that many with autism disorders live with will once again be hidden from public sight.  Everyone will wear their blue shirts (including Conor and me)  and many will put blue lights in front of their homes, businesses and legislatures.  The Autism Feel Good crowd will tell everyone that autism is a difference not a disability and some will tell the world that historical geniuses in every field in the sciences, math, literature, art from Van Gogh to Einstein were probably autistic.

A misconception underlying much of the WAAD false awareness is found in the DSM assertion that there is one autism disorder with only 2 diagnostic criteria: Social communication/social interaction deficits and  Restricted, repetitive patterns of behavior, interests, or activities. The DSM does also reference various "comorbid" conditions sometimes found in connection with autism including several from which my now 18 year old son has suffered along with his severe autism disorder: wandering, self injurious behavior, reactive aggression, absence seizures and tonic clonic seizures.  The DSM categorization of disorders, as none other than NIMH Director Dr Tom Insel has pointed out, have no solid evidence basis for its conceptualizations of disorders. TheyDSM categories lack validity. So said Dr Tom Insel before he repeated it again (sort of) but stated that he only meant it for research not clinical purposes.


One of the areas in which the DSM5 erred egregiously (in the humble opinion of this lowly father of an 18 year old son with severe autism disorder, intellectual disability and epileptic seizures)  was to combine the 3 varied and distinctively different disorders of Autistic Disorder, PDD-NOS and Aspergers into one "spectrum" disorder.  Renowned autism experts , including such authorities as Lynn Waterhouse, in Rethinking Autism: Variation and Complexity,  have started to explicitly describe "autism" as a varied, complex and heterogenous group of disorders or symptoms. Dr Waterhouse has again written on the subject of autism heterogeneity in a paper co-authored with Christopher Gillberg, (2014) Why Autism Must Be Taken Apart, the abstract of which states:

Although accumulated evidence has demonstrated that autism is found with many varied brain dysfunctions, researchers have tried to find a single brain dysfunction that would provide neurobiological validity for autism. However, unitary models of autism brain dysfunction have not adequately addressed conflicting evidence, and efforts to find a single unifying brain dysfunction have led the field away from research to explore individual variation and micro-subgroups. Autism must be taken apart in order to find neurobiological treatment targets. Three research changes are needed. The belief that there is a single defining autism spectrum disorder brain dysfunction must be relinquished. The noise caused by the thorny brain-symptom inference problem must be reduced. Researchers must explore individual variation in brain measures within autism.”

I am not an autism expert. I am the father, as I have stated, of an 18 year old son with autism, intellectual disability and seizure activities becoming most pronounced during his teen years when absence seizures became frequent and eventually became identified with grand mal or tonic clonic seizures.  As I have confessed, this pseudo tough guy was scared stiff to hear the sounds emitted by my son's body during the onset of his first tonic clonic seizure, to find him laying on his side his body jerking violently with drool oozing out of the cornier of his mouth.  He suffered two such seizures and a life threatening adverse reaction to his first seizure medication (Rhabdomyolysis)  which landed him in the ICU (Intensive Care Unit) of the local hospital where the ICU team saved his life and gave him back to us.

My son's condition is recognized in many autism study statistics. The World Health Organization, 2013, estimates that approximately 50% of persons with autism disorders also have an intellectual disability.  To me that large a number is not a "coincidence" or a "comorbidity" whatever that term is meant to signify in the real world. To me my son's autism and intellectual disability are aspects of one brain disorder.

Given those two aspects of my son's brain disorder it should not have come as a surprise to me that he might be at very substantial risk of suffering seizures, particularly with the onset of his teen years.  The scientific literature indicates that persons with autism spectrum disorders have a much higher rate of epilepsy than the general population; as high as 30%.  The literature also indicates that, among persons with autism. the rate of those who also have epileptic seizures is substantially higher among those with .... intellectual disability and the seizures often become apparent during the teen years ... exactly what happened to my son with severe autism and intellectual disability.

My son's autism is not the autism of Temple Grandin, Michelle Dawson or Ari Ne'eman.  He was diagnosed early 16 years ago at age 2 years because of the severity of his diagnostic symptoms and the tenaciousness of his mother who pressed our good doctors the hardest for a medical understanding of our son's condition.

Still with the autism and ID we did not anticipate the onset of seizure activities. This humble father recommends strongly that on World Autism Awareness Day, Autism Speaks and other autism organizations should be honest with people around the world and tell them that where autism is present in a child there is a substantial risk of epileptic seizures.

I also humbly recommend that the great autism thinkers of our day should consider looking at and studying instances of combined Intellectual Disability, Autism and Epilepsy as one group of conditions that might have a common origin in the brain as I believe to be true based on living with my son for 18 years.

IDEA Disorder, Intellectual Disability-Epilepsy-Autism Disorder.  By all means reject it if you believe based on study and evidence that it is unsound but don't reject it solely because a lowly parent makes the suggestion.  I have 18 years of 24/7 experience living with these conditions in my son. Statistics and professional expertise obviously count and in our society are determinative but the direct observation and experience of parents should not be ignored or ridiculed as it is all too often.
Posted by Unknown at 9:14 pm

Harold,I would really suggest you get a 23andme test done on Conor.There were a couple of threads a while back in our cerebral folate deficiency Facebook group about using 23andme to get answers.It really made sense to me.Since I know I have CFD,but I also know,I don't have mitochondrial disease.There are over twenty different forms of CFD.Many involve rare genetic diseases most hospitals cannot test for.

I then did some digging around the web.I learned 23andme has become very popular as a diagnostic tool in the rare and genetic disease community.I became very convinced to get a test myself.I am now waiting for the results.

From what I have seen from you,it seems very likely there is something genetic going on with Conor.The picture is too complicated for just "autism".Take that from somebody in that same position.He may have some rare chromosomal deletion or something.23andme will pick up all sorts of mutations and deletions most tests like microarrays cannot.If you have some especially rare problem turn up,you will most likely have to research it yourself,before you present it to your doctor.

Once you get a genetic diagnosis,it really takes you out of the autism community,and moves you into the rare disease one.You are much more likely to get real help,if you have a rare disease diagnosis,not just an autism one.Think about it,and look into it just like I did.

Roger, who is testing you for 23andme? A geneticist or a DAN doctor? We want to call our geneticist about mitochondrial disease and other rare ones. We just know there is definitely something else going on then autism and seizures.

What we need is a person like you that has the ability to more than just rattle cages. You need to be the politician that advocates for those like Conor to get better care. You would get my vote.