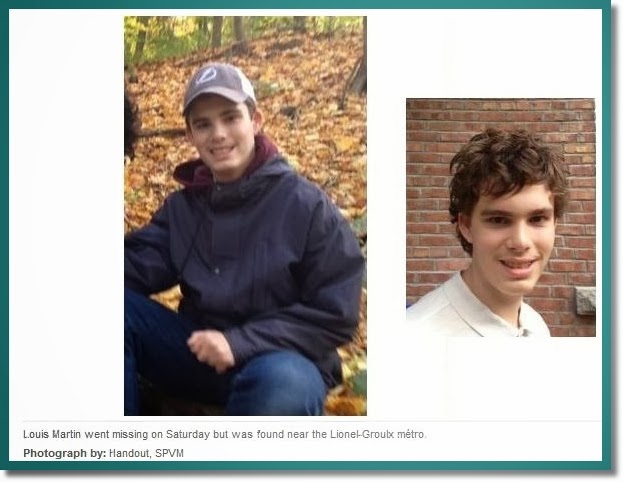 As the father of a 17 year old young man with severe autism, intellectual disability and epileptic seizures I am very happy to read that 15 year old autistic boy Louis Martin was found safe in Montreal after being reported missing by his father (who also tweeted his son's disappearance).

Wandering is a very serious problem for persons with autism, particularly when they also suffer from "comorbid" intellectual disability. It is long past time that everyone including mainstream media, Hollywood, television and autism "experts" stopped glorifying those with exceptional talents and started presenting full,  honest pictures of autism disorders.

As reported by The Montreal Gazette:

"Montreal police have located a 15-year-old boy with autism who went missing from his Outremont home early Saturday morning. Louis Martin was spotted near the Lionel-Groulx métro station after police had asked the public for help in finding the boy, who has the mental age of a 4-year-old.

Pierre Martin, the boy’s father, sent out a message on Twitter saying his son is safe.Martin, a political-science professor at the Université de Montréal, had tweeted his son’s disappearance on Saturday.
Police officers spent much of Saturday searching metro stations, parks, streets and alleys trying to locate the boy."

I'm worried that the general public will see this as a rare exception to the "holiwood" rule and will say that adults and children with severe ID's should be put away from society.

Another problem with the media is the impression given that if a child receives early and intensive intervention then they can be cured or at least no longer be ID.

The professional literature was summarized by the US Surgeon General and more recently by the American Academy of Pediatrics Management of Children with Autism Spectrum Disorders (2007)affirmed (2010):

The effectiveness of ABA-based intervention in ASDs has been well documented through 5 decades of research by using single-subject methodology 21,25,27,28 and in controlled studies of comprehensive early intensive behavioral intervention programs in university and community settings.29–40 Children who receive early intensive behavioral treatment have been shown to make substantial, sustained gains in IQ, language, academic performance, and adaptive behavior as well as some measures of social behavior, and their outcomes have been significantly better than those of children in control groups.31–4

Harold, agreed, intensive ABA therapy can bring tremendous gains. The problem is the application of ABA therapy can be very complex. Most children receive 20 hours a week of watered down therapy. It's the equivalent of teaching the general public a few hours of law and then telling them to represent themselves in court without a lawyer.