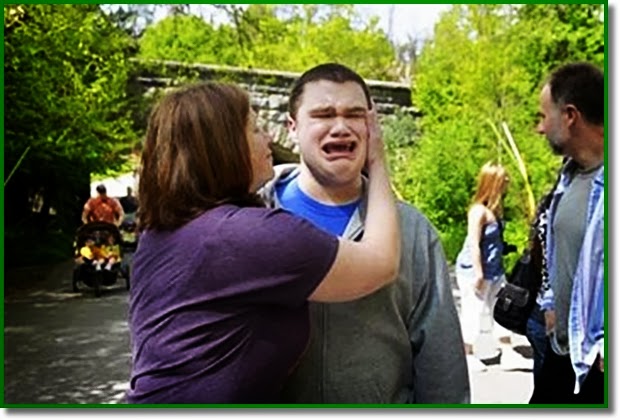 Jeffrey Maloney, 19, is comforted by his mother, Lisa,
during a family outing at the Pittsburgh Zoo & PPG Aquarium.

In a rarity in the mainstream media the Pittsburgh Post-Gazette published an honest, informed article by Mark Roth and Julia Rendleman on the challenges faced by a family with two children on the autism spectrum, one diagnosed as PDD and the other an adult son with severe autism disorder and the impact on the family, the Maloney family,  of caring for them.  The article was the first in a 4 part series on autism disorders run by the Pittsburgh Post-Gazette   called Mysteries of the Mind. The article talks about autism from two sides including the severe autism side and does not shy away from mentioning subjects well known to parents of severely autistic children such as disruptions in routine, metldowns and self injurious behaviors including pinching, head hitting and head banging against walls. The article presents the impact on the family of caring for the two autistic siblings including the impact on the other siblings.  As pointed out in the article there is much public attention paid to very high functioning persons with autism spectrum disorders but very little attention to severe autism disorders or the impact on the families of children with severe autism.  The Post-Gazette feature tries to address this very harmful lack of autism disorder awareness.

Harold, another great post!
The parents of the young man in the article were very brave to show the world how difficult it is to raise someone with severe autism. They also show love and support for their son.

Harold, keep up the good fight!

I don't know what I would do if I saw an adult having a tantrum in public.Thanks to this article I know that I would at least be more understanding.

I'm another "Autism parent" and appreciate your blog. I've also advocated throughout my son's childhood and continue to do so now that he's an adult. My blogs are:
http://findthesimplethings.blogspot.ca and http://richesofsimplicity.blogspot.ca