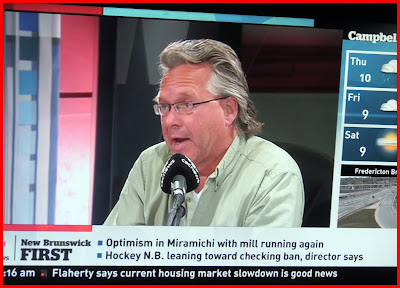 Conor is still recovering from Rhabdomyolysis, an adverse reaction to anti-seizure medication, Lamotrogine and needs phsyiotherapy to rebuild his damaged muscles, balance and co-ordination.  Just being home is a huge help for Conor, back home with Mom, Dad, his brother and his familiar routines.  One of those routines has been to get out of bed every morning at 6 am.  If he is awake at 5:30 he stays in bed until 6. That is his routine and Conor has a classic autism need for routine.  When he gets up each morning his routine has also included turning on the television and watching  "CBC Terry Seguin".

Conor has been sleeping on a living room couch since his return so I could be nearby on our other couch to keep an eye on him in case he was in distress. This morning I was in the adjacent kitchen when I heard some loud walking noises in the living room and went in to find that Conor had walked from the living room to the television to turn on CBC Terry Seguin.  Conor has been very wobbly on his feet and he has a long way to go towards recovery so I was startled to see him at our big screen TV.  I was happy though that he had done so without falling and hurting himself. It was a sure sign of progress in his recovery.  His CBC Terry Seguin television walk demonstrated improvement physically and showed that Conor will not stay down, he will keep walking until he is fully recovered.  Two thumbs up for Conor ... and for Terry Seguin!
Posted by Unknown at 6:57 am

When I looked up that page that you linked to about rhabdomyolysis,I immediately thought about what Dr.Rossignol said to me about my severe lack of muscle development.He told me that,given my GI disease,a very likely cause was passing muscle fibers in the stool,over a prolonged period of time,starting in puberty.That it was one of a long list of things that he said pointed to probable mitochondrial disease.

I see some similarities to the symptoms here,but putting it in the context of autism,it screams metabolic or mitochondrial disease to me,and I think any autism doctor would agree with me.

I found this about mitochondrial myopathy presenting as rhabdomyolysis.

While I have the more typical "red flags" type of autism seen in mito,there is quite a bit out there about autism,intellectual disability,epilepsy and mitochondrial disease.Too many articles to post links to.

I would not be at all surprised if Conor has a type of mitochondrial disease.

I hope these questions aren't too personal; how severe are Conor's seizures, and has he had them all of his life?

I'm just wondering because I have two children on the spectrum (aged 13 and 11), and thus far there are no signs of seizures but it is my understanding that it can start at any time.

Best practice of "practical" therapy I have read in a long time! Made me think of years gone by working (with my physio colleagues) and clients walking loops. Should've thought put a wide screen TV at the end!