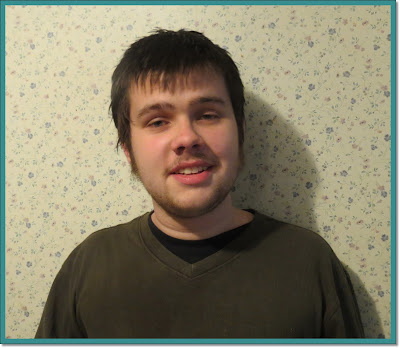 Conor home after a great swim adventure;
making terrific progress on his recovery


Conor's autism and profound developmental delay were supplemented by two grand mal seizures between November 2012 and April 2013.  The second seizure occurred two days after he began treatment with the anti seizure medication Lamotrogine.  During the second week of treatment when his dosage was increased from 1 to 2 25 mg tablets a day he began to sleep and medical advice was sought.  The specialists were not available quickly but our family doctor saw us early the next day and advised us to cut back on the dosage which we did.  Later that day though Conor still developed a rash and temperature and went to the emergency ward of the local hospital, the DECH.  He spent 6 days in the Intensive Care Unit and two weeks altogether in the hospital.  Conor's adverse reaction to his medication was diagnosed as Rhabdomyolysis a condition in which the muscles break down and release substances which pose great risk to the kidneys.  But Conor received excellent medical attention and was released to come home where he has continued to make made great progress.

We would like to take some credit for Conor's great recovery but the truth is he has led with his own initiative. Conor was jumping up off the couch even before he had his balance and we had to keep a close watch on him. This week Conor returned to school for part days.  His mobility and balance improved dramatically each day and this morning he went swimming at school for the first time since his hospital stay.  The plan was for Conor to go to the pool and sit in the hot tub.  Conor had none of that.  His aide informs us that instead  Conor walked down the accessibility ramp into the shallow end of the pool. He subsequently went to the  diving board where he jumped into the deep end and swam like a fish.  Conor also made for the giant slide where he climbed to the top and slid down.

I couldn't have asked for a better present then to learn about Conor's swim adventure today.  6 days in the ICU with 5-6 tubes at a time sticking out of my buddy Conor seem  like a bad dream today.  Our Run Jump Fly Boy was flying today and we are happy, very happy.
Posted by Unknown at 12:11 pm

Right on Harold. Not much keeps them down eh? Cam.

Conor has led the way in his recovery. We have to keep an eye on him, he just gets up and goes.

Thank you Jonathan. He is doing great, still has a ways to go on speech but we are working on that with him.

I am glad to hear your son is doing much better.

He appears to have a positive spirit of life that no one can easily take away from him.:)

I can identify with that attribute, not as easily as in the past, but never the less, remaining in my "memory bank".

Wow! So great to hear! And you know, swimming is excellent physical therapy.

So happy to hear he is doing so well.

Swimming is wonderful - but be careful: if the life guards learn about seizures they can make pool access a real pain...