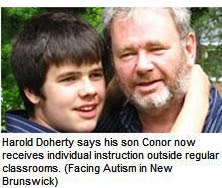 The caption below the picture of me and Conor is from the CBC web site article Autism advocate questions 'extreme' inclusion model.


"A high-profile autism advocate in New Brunswick is questioning the merits of what he calls the Department of Education's extreme inclusion model. “I believe that the kind of evidence-based intervention that we need for our children, in some cases children with autism, is absolutely necessary and to deny it is a denial of the human rights, basically, of children like my son,” he said. Doherty was responding to a recent statement written by Gordon Porter, the former head of the New Brunswick Human Rights Commission.

Harold Doherty, who has an autistic son and runs a blog dedicated to autism issues, contends the classroom isn't the right setting for every child. Porter, who has played a key role in the province's approach to inclusive education, wrote on a Canadian education website that some interventions in the school system result in segregation and pose a challenge to inclusive education. Doherty, however, argues that’s based on philosophy, not evidence.

He is challenging Porter to a public debate on the issue."

Following is the CBC audio clip of my interview by CBC's Terry Seguin.

Finally...I am very pleased to hear that you were given a more public voice! Hey CBC...full-inlcusion DOES NOT WORK FOR ALL!!!

Thank you Harold. Very well and clearly put, and so essential for the lives of New Brunswick's autistic population.

You're the best Harold!!! Keep on keepin' on. I hope he accepts the challenge. Can't wait. Cameron