Adults with Severe Autism Disorders: Do Canadians Give a Damn? 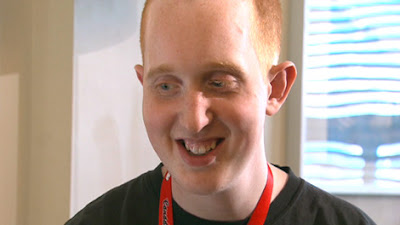 In Ontario the family of 18 year old Taylor McNee is fighting for a place for him to live.  The CTV,  to its credit, is covering this story in detail. It isn't the feel good, kumbaya, autism is beautiful fluff that too often passes for autism awareness and disabilities policy. It is the story of a son who is a joy to his family but is also prone to rages resulting from his autism disorder (Fragile X syndrome) and developmental delays.  Hospitalized for several months after one such episode he now must either return home where he is a risk to his younger brother or have nowhere to live.  It is a story familiar to parents of severely autistic adults including here in New Brunswick.  The Taylor McNee story as reported on CTV:


"Taylor McNee is an 18-year-old with autism who been living in a hospital room for five months because there is nowhere else for him to go. And his case is once again highlighting a growing problem: who will take care of autistic children once they become adults? Taylor has a genetic condition called Fragile X syndrome, which has led to both autism and developmental delays. His family says he is a sweet, loving boy who is usually very easygoing. But Taylor is prone to rages and can suddenly lose control.

Five months ago, one of the rage incidents led to injuries that required him to be taken to Toronto Western Hospital. He's long since recovered but has been there ever since. The hospital says Taylor needs to leave, since he no longer needs medical care. But his mother says it's not safe for him to come home and that he risks injuring his younger brother, Ethan, who also has a genetic developmental disorder."


The Taylor McNee story is common elsewhere in Canada including here in New Brunswick where severely autistic adults live in inadequate group homes lacking the professional expertise and adequately trained staff, life in a psychiatric hospital and a variety of ad hoc arrangements.  Efforts to establish an intermediate level facility close to autism expertise in Fredericton have been spurned both by government and by the New Brunswick Association for Community Living which dominates all decision making involving persons with disabilities in New Brunswick.


As in education so too in adult autism residential care.  The NBACL offers feel good cliches about community and inclusion but resists efforts to establish an intermediate level of care with the expertise and accommodation of the challenges of the severely autistic developmentally delayed population.  The NBACL officials, Order of Canada and Order of New Brunswick ribbon collectors and political friends feel good. The severely challenged autistic population and their families are left to fact the reality of live in hospitals ... if they are lucky.

Here in New Brunswick, and elsewhere in Canada, we must abandon reliance on feel good cliches and fluffy philosophies and start focusing on the realities of life for severely autistic developmentally delayed adults with the aim of providing them with appropriate facilities in which to live out their lives in decent conditions.
Posted by Unknown at 7:52 am

I did discover something a day or 2 ago in the news. As a disabled adult you can, in Ontario, go into a long-term care facility - mostly for seniors. It is my understanding that this is happening more and more and of course NOBODY is trained to deal with those with autism, developmental delays and other mental health issues in these facilities.

It was in our local town paper this past week.

One thing that is also very frustrating is that they want to extend mental health services for addictions but they never talk about disabilities or mental health disorders... they don't appear to exist.

Truth is, his parents should refuse to take custody of him. It's not right but it may be necessary.

Long term care facilities that deal primarily with senior citizens are ill-equipped to deal with the realities of severe autism. From what nurses I know tell me, all they do in these long term facilities is push medications. And more medications. It's more like a hospice than a treatment healing facility. Very sad and most certainly something more needs to be done. Adults with disabilities pose a unique challenge for nurses and caregivers at these facilities. You can't expect the average nurse to understand or be able to handle severely-autistic adults. They are radically different than senior citizens battling Alzhemier's or other senior related conditions. People on the spectrum require specially trained caregivers and nurses who are aware of the unique and individual needs of the autistic population.

A facility which cares for fragile seniors is no place for a person unable to live at home because he is a risk of harming his family members.
He could quite easily injure or kill an elderly person.
The public institutions such as Camarillo State Hospital ( in the US) need to be brought back to serve this population.

Where do servely autistic adults go to live in Alberta? I am the parent of a 21 year old male. I am not going to be able to care for him for the rest of my life. Group homes at not suitable for those who are unable to care for themselves. They need help with washing, bathing, feeding etc. and many have behavioral problems. All provinces need to address this problem now. There will be more like my son as the adults autism population is growing fast.

I have started a petition to lobby the Ontario government to create more residential care spaces for adults with autism and developmental delays. Please consider supporting this petition.
http://www.facebook.com/pages/Petition-re-Long-Term-Care-for-Adults-with-Autism-Ontario/313070998795269