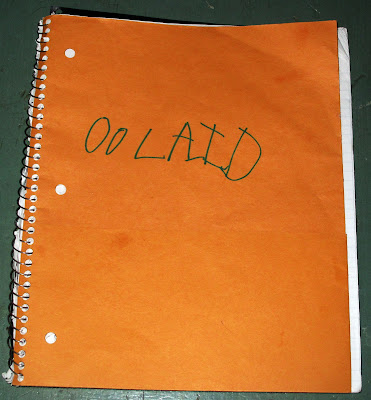 I was doing some work at home the other day and was looking for a notebook to record some information.  I found the one pictured above with the word OOLAID in Conor's hand printed on the back cover. OOLAID is a sign of some of the challenges Conor faces by virtue of his severe Autistic Disorder and profound developmental delays.  At the same time it is a sign of his sense of humor and his progress.
OOLAID, as you might have guessed is short for Kool-Aid.  Conor loved Kool-Aid, both the flavors and the different colors.  At a certain point he was getting sick once a week almost on schedule every Friday.  I couldn't figure out what was bothering him until I realized how much Kool-Aid Conor was self imbibing.   Conor was drinking Kool-Aid obsessively.  I figured the volume of Kool-Aid he was drinking was probably making him sick.  Rather than try to finesse or manage his consumption of Kool-Aid I cut him off completely to see if his  excessive consumption of K-A was the problem.  The weekly vomiting sessions stopped immediately and have not recurred since.
I am not knocking Kool-Aid or any contents including dye for the colors. In Conor's case it was clearly his obsessive consumption of the different flavors and colors that was the issue.  His consumption was not what you would expect from anyone and had to be modified.  We opted for the complete cut off approach and substituted more juices and milk when ever he requested Kool-Aid which we kept out of the house.  When Conor asked for Kool-Aid his mom would ask him what does Daddy say to Kool-Aid and Conor would answer Nooooooooooo!
Both in an attempt to change Dad's mind, and in a demonstration of his sense of humor Conor will periodically ask for OOLAID instead of Kool-Aid.  He will often laugh while doing so.  What surprised me about the "OOLAID" on the back of the notebook is that he printed it, without any prompting, entirely on his own initiative and without any reinforcement for having written his letters.
To many observers Conor's initiative in writing OOLAID may not seem like much but to this father of a severely autistic, intellectually disabled son .... it made my day to find this bit of Conor handiwork. It really made my day!
Posted by Unknown at 2:09 pm

My youngest son's Teacher and I were discussing the rebranding of FC on Tues at the IEP meeting. Yes, there are times where he's taught correct sentence structure and he has to write correctly, but in our opinion, the real Russell is when he does it himself. Tues, free typing period was to do a complete list of credits (people and positions) that he has memorized from somewhere. We haven't figured out where from yet.

The FC crowd and their fake perfect conversations.... not for me.

I've been known to frame things like this. ;) Love It!

What an awesome experience...I don't know, but I can imagine how you must feel. Certainly Conor is fortunate to have parent such as you and it is a pity that the system is not preparing itself for the day when you may not be able to bring your love and comfort. My experience with autism has left a tremendous sense of admiration for the parents who have to deal with it. If there is ever an opportunity to bring the urgency for a residential program for people with autism to the attention of the government we should not hesitate to do so.