Severe Autism, A Broken Father and A Fatality Inquiry 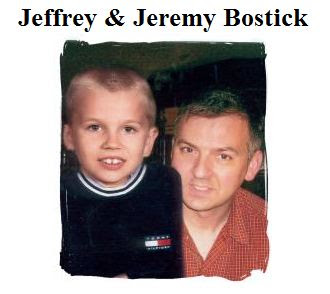 2009 Obituary Notice Photo of Jeremy & Jeffrey Bostick, at mintofh.com
Some people say that it is unfair to describe a person with autism as either severely autistic or low functioning.  Such  rhetoric is sheer nonsense that helps hide the very existence of  people with severe autistic disorders.

In Edmonton a severely autistic boy  killed by his father in a murder suicide two years ago is now the subject of a fatality inquiry in Edmonton. The inquiry is being reported on a number of major news outlets including CBC, CTV and the Edmonton Journal. Unfortunately it takes a tragedy before the lives of those who are severely autistic are acknowledged by the media.
I do not mean and I do not insinuate that in this case the father was in any way  "justified" in his actions, or that his son's severe autism "caused" the father to take their lives.  I am simply pointing to the challenges faced by the severely autistic boy in his short life, by service providers, by the family, and by the father who broke from various challenges, including his son's severe autism disorder,  job loss and debt loads.  Much of the reported evidence details the father's stress in living with, and caring for, his severely autistic and intellectually disabled son.  Another was living without him, seeing first hand the institutionalized life that awaited his son. According to reported testimony the father "snapped" after seeing the group home where his son was about to be sent to live.
The son's behavioral challenges, as reported in the Edmonton Journal, leave no room to rationally harbor the absurd notion that it is unfair to describe persons with autism by severity or functioning level:
"Jeremy’s parents reported he had “blow ups” several times a day, banged his head when unhappy and displayed other difficult behaviours. The agency helped the family find daycare for the boy and he was placed in a specialized school program for children with special needs.
But by 2007, Jeremy’s behaviour had worsened, Caputo told the inquiry. He was routinely sent home from day cares for striking and biting infants. At one point, he head-butted his father while leaving the hospital, knocking Bostick unconscious. Caputo said she couldn’t physically handle Jeremy and her relationship with Bostick had virtually collapsed just before the deaths in 2009.
Caputo described a combination of waits for services and said some agencies dropped the family because staff couldn’t handle Jeremy’s violent outbursts."
The mainstream media routinely publish "feel good" stories about autism. The   "autism is an advantage", "autism is beautiful", "joy of autism" rhetoric is routinely offered up for public consumption.
It is a sad reality that it takes a tragic event like this murder suicide to force the realities of severe autistic disorder, the intellectual disability and serious behavioral challenges that often come with it, into the mainstream media spotlight.

The current inquiry will have heard the evidence and will hopefully be able to make some significant, helpful recommendations for persons like Jeremy and his family.

As the father of a severely autistic son with intellectual disabilities I recommend that we all start by talking honestly about the realities of severe autism and stop the harmful nonsense of pretending that it does not exist.
Posted by Unknown at 4:41 am

Like any reporting I appreciate seeing all angles. As the father of an autistic daughter, I DO want to see the feel good stories.

But, as a follower of your blog, and others that capture a lot of the darker aspects of it in the news and daily life, I also want to see those.

yes this was very very sad. I kept thinking what would I have done? There was no answer. An all round failure on everyone's part results in these horrific endings. Failure of community, family, friends, random strangers, government support and so on.

Some kids with autism will go on to make their own films, graduate highschool, talk about being autistic and their difference. Some families however will break, most kids will never be able to articulate how they are feeling, live below the poverty line and some will be killed. This second group has no voice.

How terribly, terribly sad. And wrong. You are quite right - there is a real disconnect between autism-as-we-know-it and general public perception. I'm not sure how to fix that - changing the DSM would be a start, for sure. I've seen what happens when teachers, Agencies, et al. offer services because they know about autism - then realize the only thing they know about is what was f/k/a Asbergers. . . at the same time, because these services are out ther, publicly proclaiming expertise, lack of service for our children is perceived as some kind of deliberate failing on our part. Man, talk about blame the victim! But, but, but: I fear people associating autism with only the bad will deny any opportunity for social role valorization - access to the community, least possible restrictions, etc... it's a problem of portraying reality versus inciting a lynch mob. However shall we handle this? Suggestions?

CTV News: "Caputo said she didn't see the warning signs. Although Bostick had talked two years earlier about killing himself and his son, "I didn't think he was serious," she said."

I think we should educate and support the mothers and teach them about the signs which where clearly there when the father suggested murder suicide years before.
Talking about killing yourself is one thing, but killing another human being is called Uthering Threats to cause death and is againgst the law.
The mother should have called the authorities right there and then.
The father would have been arrested and taken away from the home. Related to his actions, the father would have gotten proper treatment and perhaps the boy and the father would have still been alive today.

I actually struggle with the use of the term "low-functioning" for those with severe autism (I find it puts all the focus on what a person "can't do"), however, it's dangerous to sanitize the realities of severe autism as well.

This week was an awful week for my daughter. She spent most of it caught in obsessions, tantrums, self injurious behaviours, non-stop screaming/rooster noises and the usual strategies were barely effective. When she gets like this the school sends her home because their "afraid she will seriously hurt herself". So they send her home to me? What happens if she hurts herself at home? I don't have any support staff to help restrain her or witnesses to prove that her many bruises did not come from me... if I end up taking her to the ER, do I get charged with abuse or negligence?

This story is tragic. As far as 'Anonymous 10:09's comment: "the father would have gotten proper treatment and maybe the boy and his father would have still been alive today"... I think you're making a lot of assumptions/judgments here. I'm not justifying the fathers actions but it's clear that the lack of appropriate support had a lot to do with this tragedy. It's the support system that needs the treatment, not (necessarily) the hardworking people who are trying to support their loved ones. And institutions should not be the only answer for our children!

I love this post because it is truth. Keep speaking this truth to the public. Obviously, our society is doing a real injustice for people with autism by glossing over it.

I knew both jeff and jeremey personally. Jeff loved his son very much. And Jeremey loved jeff very much to , they were best friends. Jeff saw no other way out. He wanted only the best for jeremey. I miss them both greatly....