Michelle Dawson (2008): Autism Is A Disability, A Neurodevelopmental Disorder 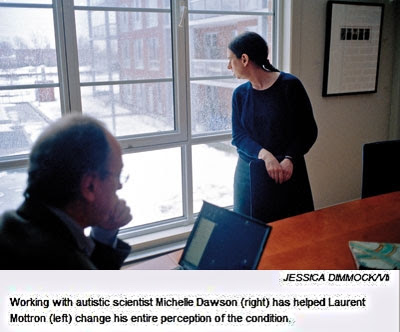 Photo from Nature Magazine, November 2 2011,  Shows High Functioning Autistic,
Researcher and Anti-ABA Activist* Michelle Dawson and High Functioning
Autism Expert  and Anti-ABA Activist* Dr. Laurent Mottron
It may seem surprising to some to learn that Michelle Dawson, the central image of the "Autism is an Advantage" campaign of  high functioning autism researcher and anti-ABA activist Dr. Laurent Mottron has herself formally declared that autism is a disability and a neurodevelopmental disorder.


A complaint pursuant to the Canadian Human Rights Act is brought under one of the grounds listed in section 3 of the Act. The Tribunal decision listed the grounds as  race, national or ethnic origin, colour, religion, age, sex, sexual orientation, marital status, family status, disability and conviction for which a pardon has been granted. In Ms Dawson's case she alleged discrimination, harassment and retaliation against her by Canada Post on the basis of disability ... autism ... as set out in several paragraphs of the CHRT decsions:


[2] In her complaint, dated August 9, 2002,  Ms. Dawson alleges that the Respondent discriminated against her on the basis of disability, in breach of section 7 of the Canadian Human Rights Act in that it failed to accommodate her disability (autism).


[86] Ms. Dawson testified that autism is a neurological disability and that people generally do not have a good understanding of this reality.

[220] The Tribunal thus finds that Ms. Dawson’s disability was an important factor in the way she was treated by the Respondent in relation to the above mentioned events and that the  Respondent’s conduct amounts to harassment and contravenes section 14 of the Act.

Contrary to those who assert that autism is an advantage Ms Dawson, as indicated in the CHRT decision,  testified that autistic persons compared to non autistic people process information very differently, at a very basic profound level, really low level.  Ms Dawson also testified about a serious deficit which afflicts many with autism disorders  SIB, or Self Injurious Behavior.  She gave evidence before the tribunal about her own Self Injurious Behavior. I commend Ms Dawson for having the courage to speak openly and honestly about her own very serious autism deficit, her self wounding:


[97]In her testimony, Ms. Dawson spoke about her self-inflicted injuries. Ms. Dawson testified that, at the very worst, there was probably a week or two weeks where two weeks in a row, she would have something, that she would injure herself. She added, however, that this would be rare. According to her, she would self-injure about once a month and never more. She testified that for cuts, it would not be more than one small area affected and not more than one or two cuts, but they would be in the same place.

A Mysterious Dr. M testified about autism and self injury generally indicating that self-injury is linked to autism. He also talked about having diagnosed Michelle Dawson, having written letters on her behalf and having observed the results of her self injurious behavior:


[110]Dr. M. testified that, while the ordinary person will become aggressive when anxious, autistic individuals will sometimes self-injure. This is especially the case, according to Dr. M., when an autistic person cannot understand a situation or cannot get an answer to a question. According to Dr. M., self-injury is the most extreme response to a psychological impasse that has no solution. It is a response to a disorganization of the world. It is the way for an autistic person to respond to negative situations whereas non autistic persons will show anger. Dr. M. stated in his testimony that he was aware of Ms. Dawson self-injury behavior. He had seen one of the wounds she had inflicted upon herself. For Dr. M., a self-inflicted injury is a sign of a deep psychological suffering.

[111] According to Dr. M., autistic people will also have a self-injurious behavior when experiencing internal pain of physical or psychological displeasure. So, if an autistic person finds himself or herself in a situation where he or she cannot escape, or experiences a feeling of disorder, he or she may self-injure, such as biting one's arm or hand. Dr. M. added that it is very difficult for a non autistic person to understand this type of behavior.
[130] Dr. M. testified that Ms. Dawson had told him that the injury that she self-inflicted helped her psychologically. For Dr. M., Ms. Dawson had the habit of self-injuring. Dr. M. interpreted these acts of self-injury as a sign of major psychological suffering, a way for autistic individuals to cope with anxiety. He stated in his testimony that he personally saw one of the wounds that Ms. Dawson had inflicted upon herself and stated that the wound was impressive, and would have been impressive for her coworkers.


Dr. Mottron's opinion piece in Nature magazine emphasized what he considers to be the advantages of autism and spent little time discussing the serious deficits that can accompany those with autism disorders.  Even Michelle Dawson described in the CHRT proceeding as intelligent and high functioning can suffer from serious Self Injurious Behavior. This father of a severely autistic young man with profound developmental delays who has engaged in serious self injurious behavior has no doubt that autism is a disability, a neurological disorder.  Especially for those like my son who do not share Ms Dawson's communication and high functioning abilities and intelligence self injurious behavior is a very serous reality, a deficit, not an advantage.


It is unfortunate that Dr. Laurent Mottron who has built a fine reputation for himself conducting studies and writing articles about high functioning autistics, persons with Aspergers and autistic savants, would downplay the serious deficits that accompany autism disorders.  He,  and his colleague Michelle Dawson, have opposed government financing in Canada of ABA treatment for autism, to this date the only solidly evidence based intervention for autism.


Almost annually a naive, autism ignorant mainstream media swallows the Mottron Mantra and paints a picture of autism as something other than what it is ... a disability ...  a serious neurodevelopmental disorder. In doing so Mottron and the MSM do a great disservice to those most severely affected by autism disorders.


*Ms Dawson made representations as an "autistic" to the Supreme Court of Canada in the landmark Auton Case in which the SCC overturned British Columbia Court decisions which had required the BC government to fund ABA treatment for autistic children. Her application to the Court for intervenor status was supported by an affidavit from Dr. Laurent Mottron. In her representations to the Supreme Court Ms Dawson opposed ABA therapy.  See Auton (Guardian ad litem of) v. British Columbia (Attorney General), 2004 SCC 78, [2004] 3 SCR 657, paragraph 5, "Indeed one of the interveners in this appeal, herself an autistic person, argues against the therapy."
**Note: I was an in house labour lawyer with Canada Post in Ontario between 1993 and 1997 but had never heard of Ms Dawson until after my return to private practice in New Brunswick. My son was diagnosed with Autistic Disorder a year after I returned to private practice and I become active in autism advocacy in New Brunswick.  Ms Dawson contacted me by telephone to ask for access to a legal opinion concerning autism which she heard had been provided to the Autism Society New Brunswick of which I was president at the time.
Posted by Unknown at 9:07 am

I see two types of autism - 1) those afflicted by a disabling condition and 2) those cashing in on a diagnosis. Odd how the cashing in types more than not do a complete disservice to the afflicted but still grab all the benefits an afflicted may get for their own self serving needs. Like my granddaddy was often to say “You don’t need to be a farmer to be able to identify bullsh..”