Autism Parents: "You Need To Take Your Heart In Your Teeth And Go On ... And Go On"

"For those parents who say they are too broke and too tired...you need to take your heart in your teeth and go on...and go on...." 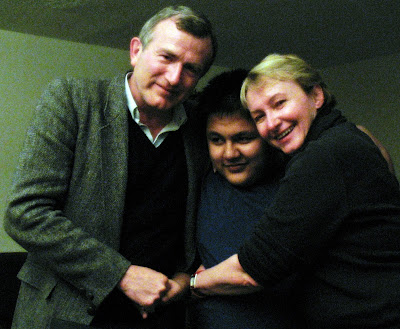 David Marley, Simon Marinoiu, Jean Lewis, 2008
The above comment by Stefan Marinoiu, father of a severely autistic son, Simon Marinoiu,  is great advice for parents of autistic children.  It is the advice of a man who has literally walked that path and knows of what he speaks. As the parent of a severely autistic son I do not always want to hear from people who know nothing of the realities of severe, low functioning autism disorders telling me what is best for my son or what I must do to help him.  When I listened to Stefan Marinoui though I was listening to one who knew of what he talked, one who had quite literally walked the walk.
On January 31, 2008 in the middle of a cold Canadian winter Stefan Marinoiu left his home in the Toronto suburb of Scarborough and began walking with only the clothes on his back to Ottawa to raise awareness about the lack of services for people like his son Simon, a strong young man with limited communication abilities and serious behavior issues. When Stefan arrived safely in Ottawa, after receiving help from well wishers he met on his journey, he met with then Health Minister Tony Clement.
Unfortunately Tony Clement, and the government of Prime Minister Stephen Harper were not genuinely moved by Stefan's journey. They have done absolutely nothing to ensure that  all autistic children in Canada received evidence based ABA treatment for their autism. They have done nothing to ensure that autistic adults in Canada have access to decent residential care and treatment. Gazebos, prisons, jet fighters sure, but not real help for autistic Canadian children or adults.
I met Stefan and his wonderful family when I, along with Jean Lewis and David Marley of Medicare for Autism NOW!, visited their home in the Toronto area in 2008.  Stefan is a modest person of great focus and presence.  There is no hidden agenda. His concerns are clearly and succinctly expressed in compelling language as in the advice quoted above.  I was deeply moved by the Marinoiu family, for the love they have for Simon, by their struggles to help him and by the impact Simon's autism has had on their lives.

In Medicare's Orphans Stefan, wife Bernadette and daughter Lia speak about what Simon's autism is like and what it has meant to them, the impact it has had on the members of their family.  If you watch this film and listen to Stefan, Bernadette and Lia, you will be moved.  Listening to their stories again strengthens my resolve to continue advocating for my son Conor and other children and adults with autism disorders. It strengthens my resolve to fight for early intervention, effective, real education and decent residential care for autistic children and adults here in New Brunswick and across Canada.

If you are a parent of a child with an autism disorder I encourage you to view the Medicare's Orphans film and "take your heart in your teeth ... and go on ... and go on".
Posted by Unknown at 7:04 am

I watched the film. It was very good. I must admit Stefan Marinoiu's quote had more meaning after seeing his story. That's pretty intense, but then, so are their lives and Simon's needs.

Did you see this?? Kids with severe autism, no words, in a study~~~ Six non-verbal children with autism participated.

This is related, a write-up on the study. http://sfari.org/news-and-opinion/conference-news/2011/society-for-neuroscience-2011/structure-of-language-pathways-may-differ-in-non-verbal-autism

It's a tiny start, but kids with severe autism are being considered , even though it's hard work.

I know I'm a sentimental guppy...but I think of where Helen Keller might have been without a way to reach her.

Finally got a chance to watch this Howard. As expected it was excellent! Did'nt know you were in it. You were great! Got any suggestions as to what we can do here in N.B. Cam.