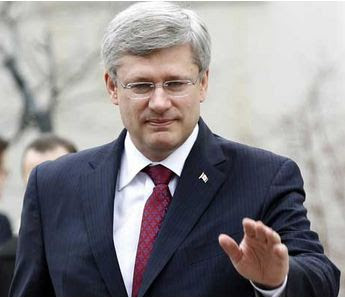 Photograph by: Blair Gable, Reuters
Canadians are waiting to see what Stephen Harper does with the very solid majority that Canadians voted to give him on Monday.  One thing they will not have to wait for during the Harper majority years is a Real National Autism Strategy.  I am not a fan of Stephen Harper and I do not trust him on important issues like health care.  What I do not question is his opposition to any serious role for the federal government in ensuring that autistic children and adults across Canada receive effective evidence based treatment for autism,  a real education or decent, autism specific residential care.
Citing Constitutional grounds Harper's team led by Mike Lake, father of an autistic son,  have consistently refused to get involved in any meaningful effort to help autistic Canadians.  The recent declaration by prominent British Columbia Harper cabinet minister James Moore that autism is not a disability calls into question Mike Lake's autism awareness efforts within his own party but leaves no room for doubt.  There will be no help for autistic Canadians, no Medicare for Autism, no Real National Autism Strategy during a Harper administration.  Any efforts to bring about a Real National Autism Strategy must look to the future until after the Harper majority has run its course.
Posted by Unknown at 10:45 pm

Did notice that NB doesn't seem to unhappy with it's PC provincial gov't since they voted in a PC Federal one less 2 ridings.

Hoping in Oct Ontario does the same. You can complain about him and his stance on health care all you want, but I have a Liberal gov't in place that IMO cares about the disabled even less. 1.5billion and counting on full time daycare for 3-5yr olds. The infrastructure, and 2 teachers/class plus 1 extra in the existing JK/SK classes and there is still NO extra money for ANY child or adult with ANY disability.

And you're worried about Harper. You're welcome to McGuinty.

FW2 attacking the Liberal Premier of Ontario, or pointing out that NB voted Conservative does not in any way address the point of my post which is that there will be no real national autism strategy under Harper.

I don't know what you stand for at all other than your opposition to ABA.

Harold,
What would a "national autism strategy" look like? Are you just wanting the federal government to give money to the provinces for autism services? Would the money have "strings attached" to meet national standards? Could the provinces opt out with full compensation? If you were the prime minister what would your national strategy be? Help me understand this because I just don't get it - it sounds like just a plea to put more money into the system but I know I'm not right.

I am feeling sorry for this poor man.
I live in South Africa, my son is autistic, and here autism is seen as a disability. And I thought we were living in a third world country?

well how do we change his mind? why dont we all try?

Well said, Mr. Harold Doherty. You speak the truth and we illustrate it. http://ivote4autism.blogspot.com/

Here is a look at how much funding has been delegated to autism under Harper and past governments since 2000: http://ivote4autism.blogspot.com/2010/07/harpers-priorities-illustrated.html

And here is one that shows Harper's priorities and their most current stance when asked about a National Autism Strategy: http://ivote4autism.blogspot.com/2010/11/canadas-current-national-autism.html

Keep your voice loud and strong, Harold. We will never get there without you and this great blog!

I don't want the government solving autism. Especially not the federal government. It's not its jurisdiction.

Suzanne, your jurisdiction argument is cited by other Harper "Big Blue Wave" Conservatives in opposing a federal role in health care for all Canadians. By that narrow logic we would never have had any Medicare scheme in Canada.

No one is asking the federal government to "solve" autism. What is being asked, by those who actually care about autistic children and adults, is that the federal government using its spending power, a power which it already uses in distributing health dollars to the provinces, to ensure that all autistic Canadians, regardless of where they live in Canada, receive treatment for their autism disorders.

That is what is being asked Suzanne.

Early diagnosis and treatment helps young children with autism develop to their full potential. The primary goal of treatment is to improve the overall ability of the child to function.
Autism Treatment