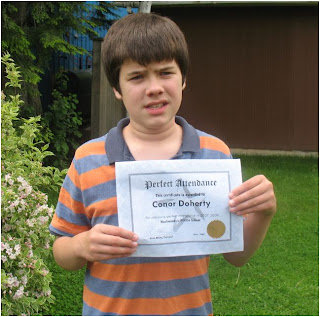 
Transitions are very difficult for many with autism.  Conor,  who has Autistic Disorder and intellectual disabilities, is now in his last year of middle school and will be moving next year from Nashwaaksis Middle School to Leo Hayes High School.  The planning for that transition began in the new year when we met with a planning  team from the middle school, high school and School District 18.  A good solid  transition plan was worked out and ... equally importantly ... implementation is proceeding as planned.
The essence of the transition planning is to famliiarize Conor with the new school itself and the people who will be working with him in small bites while he is still attending his regular middle school. The teacher assistants who will be involved with Conor next year have visited him and begun working with him part days at his current school.  He knows their names, he knows them. They are now part of Conor's picture. Conor has also spent part days at the high school he will be attending next year becoming familiar with the setting in which he will be educated next year.
Yesterday was  a very good day for Conor.  He spent a full day at Leo Hayes High School working with the teacher assistants in the actual location in which he will be educated next year. Conor's excellent current teacher assistant Brad, who has been involved with Conor for most of his three years at middle school attended with Conor but removed himself from the scene, faded out of the picture, at various times during the day.  Conor did very well and  is scheduled to attend at Leo Hayes High School again this Wednesday for another full day. Hopefully it will go well as it did yesterday.
We had worried about Conor's transition from grade school to middle school but Conor loved it.  In the picture above he is shown posing with his perfect attendance certificate he received after completing his first year at Middle School.   When we moved to our current home 4 years ago we prepared Conor by driving by and pointing out our "new house" to him.  A friend, who is also an educator and Autism Clinical Supervisor, who has previously worked with Conor,  prepared some story boards with pictures of the "new house" on it and the transition was a huge success. So we know Conor  can handle transitions when properly planned for and implemented.

Conor's transition to high school has already begun and, while taking it one day at a time, we are very optimistic that it will work out well for Conor. When  he starts high school next year it will be in a place, and with people, that are already part of Conor's picture.
Posted by Unknown at 6:11 am

I am sure the transition will go well, as it is well planned and prepared.

LHHS is going well for Justin and us. Conor will have a friend waiting for him!

My little man travels relatively easy so our transition plan is a little shorter. He's been once to the new school. That morning, the teacher let him and the other children have free time so he could check out the classroom... stuffed with stuff... and meet the children. We went out for recess, snack and had circle time.

Last week when everyone else was doing EQAO, he and his EA did his transition booklet - it'll come home for the summer - in Writing with Symbols and put in the pics of the new school and classroom.

He goes again in a week. He'll be there for a couple of hours in the morning and I'm going to run errands in town.

The Teacher and I are in email contact and have exchanged numbers. We are writing out our own "stuff to know about him" list, not just the school doing it. I've discussed my reason's for moving him and my goals.

Had we needed more transition time it would have been granted.

We're looking forward to next year. Glad your transition is going well too.

How nice to see such thoughtful transition planning!