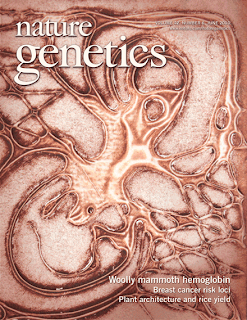 "Apparently an intact postsynaptic structure is especially important for the development of cognitive functions, language, and social competence"

In Newly Discovered Gene Variants Lead To Autism And Mental Retardation  Medical News Today reports on a Study by Researchers working with Professor Gudrun Rappold, Director of the Department of Molecular Human Genetics at Heidelberg University Hospital who purportedly have found genetic mutations in the SHANK2 gene, partially responsible for linking nerve cells,  and variants in the number of gene copies that were common to patients with autism and patients with mental retardation. The mutations and variants were not found in control patients in the study.

This is perplexing to me. I think locating the gene is critical to finding a cure and preventing others from this disease. What perplexes me is that I have an autistic child that is in the gifted program at school, his IQ is 160! It is odd that the gene is also linked to mental retardation.

Anon... according to the full article that was out a week ago on CBC... They aren't certain how those sets of gene's "act", "react" etc.

Which while proving Harold's "every kid with autism is ID/MR" theory". It also proves that those with severe autism aren't necessarily MR/ID.

FW2 if you are going to allege that I have a specific theory or that I have made a statement please back it up with some kind of a quote.

I have reported the CPA and CDC figures which indicated approximately 80% of persons with the diagnosis of Autistic Disorder also have an Intellectual Disability.

I realize that information makes you angry but try to rein in your anger enough to deal with the argument that I make. Don't make it up as you go please.

Thank you for posting this. I like to keep up on what's out there, no matter what it says.

I'm not convinced that finding a gene will be the magic bullet, but it certainly can't hurt.

What's with all the contentious comments on every story, blog and report? Even if this author had expressed an opinion, is that a bad thing? As a parent, you can't help but have a theory or two, and you can't refrain from looking for some answers. Last I checked, that was allowed. Unless the thought police have taken over, have they?

FW2 no one has ever talked in absolutes, a person with autism does not necessarily have an ID. The figure I'm most used to seeing is the 68% one. I've only seen the 80% figure once, and so it strikes me as high, but it comes from a documented and reputable source.

Anonymous do you think your son's 4 Sigma increase in intelligence is due to his autism. I wonder how many autistics have such intelligence.
In the human population as a whole, it's about 1 out every 31,000.