Community Activist and Autism Advocate David Marley: One Heck of a Scrapper 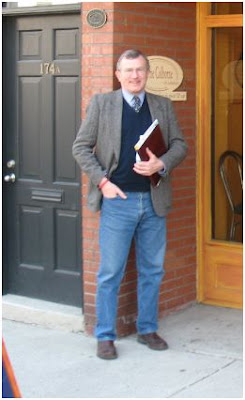 I have no vote in today's British Columbia election. I do not pretend to know the area, other than what I have heard from my BC friends. I am certain though that if I had a vote today I would vote for fiscally responsible community activist and autism advocate David O. Marley who is running as an independent in West Vancouver-Capilano. 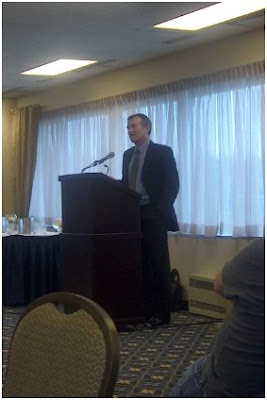 (Photo left: David Marley in Halifax, Nova Scotia speaking as part of the FEAT BC goes coastal national autism campaign)
What an official bio and agenda can never truly convey on the printed page is the real essence of a person, the real character of an individual, that can only become known from direct interaction. Anecdotal evidence is the weakest form of evidence in assessing causes and treatments for disorders such as autism disorders. It is the absolute highest form of evidence though when it comes to assessing the character of an individual. It is not truly possible to know people from afar, from media interviews and public accounts. You have to meet someone, look them in the eye, see how they respond to difficult and challenging situations.
I met David Marley in Halifax when he spoke as part of the FEAT BC Goes Coastal tour to push for a real national autism strategy. I also met him in Toronto and Oakville as part of the last pre-election tour by the Medicare for Autism Now team which graciously invited me to participate. I have exchanged emails and phone calls with David Marley. I have debated strategies and tactics for advancing a national autism strategy with him. David has a terrific background as a political organizer and as a lawyer and he shows real personal commitment to his causes - like autism. He has a sharp quick mind, a storehouse of political knowledge and many other assets. He is a true Independent who would represent his constituents ferociously.
If the people of West Vancouver-Capilano are looking for something other than the same old tired party politicians to represent them they should vote for David O. Marley - a real independent. I have met and worked on my cause - autism - with David. It is a real battle to get anything moving on the National front for autism. But David has been fighting tirelessly for that very end and having met and worked with him in that battle I can truly say that if the West Vancouver-Capilano want a real independent who will truly represent their interests they should vote Independent TODAY, they should vote for David Marley. If they do they will be electing one heck of a scrapper to fight on their behalf.