Conor After Another Seizure 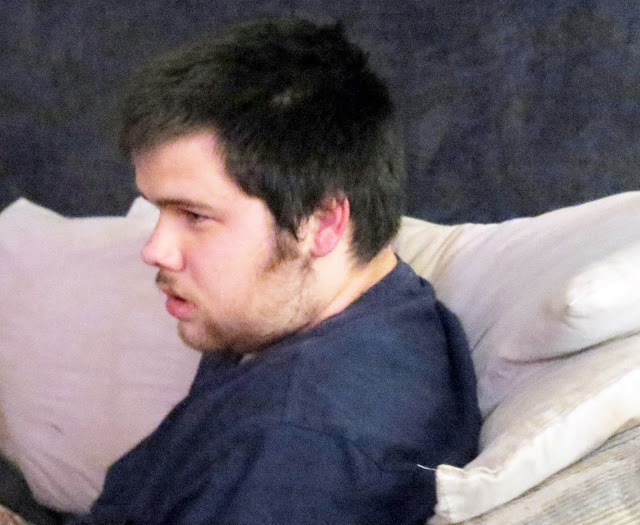 Conor has been on  a good run for the previous 7-10 days and today was pretty much the same until 6:15 this evening when we heard a loud thump uupstairs.  His mom ran upstairs and screamed for help when she saw him convulsing on the floor with thick fluids oozing out of his mouth.  We had to keep him on his side with his head away from any corners or hard objects.   This was Conor's 4th grand mal seizure since Christmas. Conor's convulsions did not appear to last too long compared to some previous seizures ..  approximately 2 minutes.  Stilll 2 minutes of your son in convulsions is enough to scare you all over again. Conor also recovered quite well. The picture above was taken 45 minutes after the seizure and while he was still a bit groggy he was regaining alertness, speech and walking ability.  He is now sleeping soundly exhausted from another seizure.  I just checked and his head was on the side on his pillow  and he was breathing loudly but clearly.  Dad is starting to relax ... a little bit.
Posted by Unknown at 8:04 pm

I am so sorry to hear that Conor had another seizure. I pray that he will be okay, Dad and Mom too.

Oh wow, my heart goes out to your wife! I know that horrible feeling of hearing a thump or crash or bang and everything in you stops and accelerates at the same time. And the shock of seeing your child suffering a seizure does not leave your mind. We must find better ways to control seizures. So many drugs. So many failed medicines. Just for future reference Harold: Epidiolex is an orphan drug that is FDA approved, but it's unclear how parents of autistic children with intracctable seizures could get it. Stay strong dad. You are a great father.