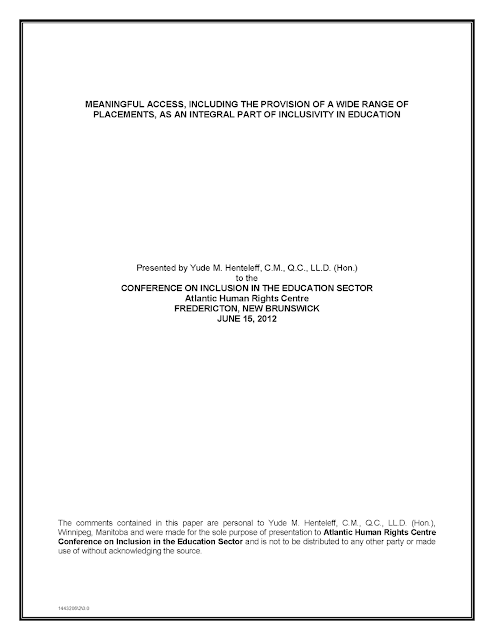 The image above is the cover page of the paper MEANINGFUL ACCESS, INCLUDING THE PROVISION OF A WIDE RANGE OF PLACEMENTS, AS AN INTEGRAL PART OF INCLUSIVITY IN EDUCATION by Yude M. Henteleff C.M., Q.C., LL.D. (Hon.). The paper is available in PDF format on the Atlantic Human Rights Centre web site by clicking on the title.

I had the privilege of meeting Mr. Henteleff at the recent Atlantic Human Rights Centre inclusive education conference in Fredericton at which he presented this paper.  His earlier work on this subject provided a thorough analysis of Canadian jurisprudence, including Supreme Court of Canada jurisprudence, concerning the accommodation of students with special needs in inclusive education.  His earlier work was the road map I followed in trying to chart a path for my severely autistic, developmentally delayed son toward achieving a meaningful  education in the extreme inclusion Province of New Brunswick.

I will not summarize Mr. Henteleff's entire paper in this comment.  Following though are some statements which he stated in his paper he strongly supports and principles derived from high legal authority in Canada and the United States.


I humbly agree with the statements Mr Henteleff supports and with his interpretation of relevant legal authorities and the principles derived from them.  I have, in my own way, articulated these principles during my participation in the Mackay, Ministerial Committee and Porter Aucoin inclusive education reviews in New Brunswick and in more recent media appearances.

These comments reflect the fact that full inclusion is a philosophy that requires regular classroom placement for all students regardless of their individual situations. As such full inclusion philosophical education practice discriminates by failing to provide an evidence based an evidence based determination of each student's best interests with respect to the place of learning.  It is a simplistic philosophy with an egalitarian feel good tone that makes "true believers" of otherwise learned educators.

Following are some of the brief introductory comments by Yude Henteleff which highlight the problems with full inclusion, philosophy based education practices:

R. v. The Board of Education for the Region of York

The Tribunal in respect to segregation v. integration and the child's best interests found as follows: It is the firm opinion of this Tribunal that the wholesale integration of exceptional pupils into regular classes, solely on the basis of philosophical principle, untempered by due and informed consideration of each individual situation, is directly counter to the best interests of all pupils. [My emphasis]

In The Journal Focus on Exceptional Children2, the authors, James A Kaufman and Patricia Pullan, explored a number of widely held myths about children with disabilities and special education. One of the myths they explored is the devotion to the ideology of full inclusion. They stated that the myth is appealing because of the simplicity (that is one placement for all students) and egalitarianism (students are not physically separated from the mainstream) so they are assumed to be integrated and treated equally. They stated that the consequences of this myth include the placement of students with disabilities in general education classrooms in which neither they nor their classmates can be well-served, and the abandonment of pull-out programs such as special classes in schools that were in fact the least restrictive environment most appropriate for such students.


Henteleff provides a thorough analysis of the relevant jurisprudence to support the critique of full inclusion practices.  He also goes beyond criticism and sets out the principles, all supported by the case law, and supported by education authorities and proposes a new paradigm for inclusive education, a paradigm which supports the legal requirements of meaningful access for all students including special needs students:

In order to assure that the best interests of SSN are met in its school system, provincial governments must establish a legal framework within its School Act for the application of the concept of meaningful access to educational services that incorporates the strands of Canadian jurisprudence to date including the international considerations which are relevant in the Canadian context.

Meaningful access to educational services is the compilation of principles enunciated in the legal decisions, namely the paramountcy of education, the best interest of the child principle, and the right to necessary resources (to enable access) to the point of undue hardship. Such a context specific and substantive legal framework would be in line with the evolving Supreme Court of Canada jurisprudence of Berg, Eaton, Eldridge, Grismer, and Via Rail, and in light of US case law previously referred to, which has interpreted the concept of "meaningful access" in the education context. Accordingly, it is critical that provincial governments establish a clear framework for the application of the legal concept of meaningful access to educational services and that the objective to achieve inclusivity in the school system must incorporate the right to meaningful access.

Meaningful access to educational services is achieved when SSN receive an education in a most enabling environment. A most enabling environment is one that: is based on correctly identified needs; is implemented by appropriately trained persons in a timely fashion, with input from caregivers and where appropriate the student; is carried out in an environment best suited to that student's needs, socially, physically, emotionally, mentally, behaviourally and cognitively;  provides those resources that reasonably enhances the student's ability to make the fullest use of the programs provided by the school system to all students;  and provides a range of placement options, each being particularly suited to meet the child's identified best interests.

Each strand as noted has the force of law. The foregoing strands collectively comprise meaningful access incorporating the fundamental principles emerging from the court decisions noted. Meaningful access, as above defined, is a legal paradigm that is context specific and which provides substantive remedy in accordance with the Charter and therefore positive outcome for all SSN.

It is critical that the School Act incorporates the right to meaningful access as above noted as an integral part of inclusion, so as to assure that all students with special needs receive the services they are entitled to in the most enabling environment and in a timely fashion. This will in turn assure that the social contract with every SSN, namely the receipt of all those resources that facilitate the fullest access possible to education services is fulfilled.

In the best interests of students with special needs, nothing less will do.
Posted by Unknown at 1:08 am

Thank you for the link. Mr. Henteleff is a thoughtful and able spokesman for balance. The piece is in my documents!

Very interesting and important, thanks for sharing this.