I Applaud The Canary Party's Real World Challenge to the IACC 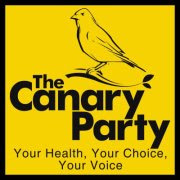 The Canary Party made a very significant statement at the Interagency Autism Coordinating Committee (IACC) meeting this week.  It's activists questioned, with their  "backs to the speakers" demonstration, and the written and oral presentations by Mark Blaxill, the direction, or lack of direction, of the IACC.  The essential question is where is autism research and where is it going? Where is the determination to find causes, all causes, treatments and cures, for autism disorders?

Blaxill and the Canary Party asked the IACC to stop fiddling while increasing numbers of children are diagnosed with autism disorders.  The IACC appears to have joined the pseudo scientists who apply rigorous standards, and in some cases, ridicule, to any attempt to research environmental causes of autism.  Meanwhile, assertions that the shocking increases in autism diagnoses are due entirely to diagnostic definition changes made two decades ago and increased social awareness, pass without any critical analysis.  The IACC does not appear to have made a concerted effort to deal with the growing autism crisis.

I am pleased to see the Canary Party standing up and holding the IACC accountable.  As a Canadian father with a severely autistic son I have always appreciated autism research by US based researchers like Lovaas and his associates that developed ABA as an evidence based method of treating and educating autistic children and adults and in managing the challenging behaviors of those with actual severe autism disorders. Canada has no serious autism research being conducted .... none at all. No, I don't count the genetic research that, despite changing the test rules have failed to pass any test by providing research of any value to increasing our understanding jof autism causes or treatments. And I do not count the repeated efforts of the Mottron Dawson research team to prove that autism is a different, better way of thinking.

I have recently applauded the decision to continue the IACC in the belief that it was genuine in its efforts to address all aspects of autism disorders including environmental causes and treatments.  I can't take issue though with the points made by the Canary Party and the oral and written submissions of Mark Blaxill.  We are no further ahead today in understanding causes of autism disorders or finding new treatments than when my 16 year old severely autistic son was diagnosed 14 years ago.

Blaxill and the Canary Party activists have challenged the IACC members to stop playing games.  Autism is serious, our children's lives matter. What happened to our children and what can be done to help them matter. The Canary Party has asked the IACC to start taking autism seriously, try to fulfill its mandate and stop the spin doctor nonsense.  Get the job done or get out of the way.

I applaud the Canary Party for standing up for autistic children and adults and their families.
Posted by Unknown at 6:01 am

It's nice to see other parts of Canada getting recognition for autism. Because the more people are made aware, the more likely that those with autism will be accepted.