What Do NB Teachers Really Think About The Porter-NBACL Full Inclusion Model?

What do New Brunswick teachers really think about the full inclusion model  which has been pushed relentlessly in NB schools by Gordon Porter and the New Brunswick Association for Community Living since the mid-1980's? The truth is many teachers recognize that extreme, everyone in the regular classroom inclusion does not work.  Teachers know this but they are afraid, for good reason, to speak up while they remain employed in New Brunswick schools. Speaking up and openly criticizing  the Inclusion Illusion would be detrimental to their careers and livelihoods and they know it.

Full inclusion, as defined by Gordon Porter, means "everyone in the mainstream classroom" as Mr. Porter preached to a Newfoundland audience a few weeks ago:


"Porter’s session revolved around the theme of parents and teachers working together to make inclusion work.“It means kids go to their neighbourhood schools with kids their own age in regular classes,” said Porter.“If you’re seven years old you go to the school just down the street. You go in a class with other seven-year-olds, and you’re supported if you have extra needs. “It’s so simple, it’s that simple,” said Porter."

I am a supporter of flexible inclusion and I am a critic and opponent of the full inclusion, everyone in the mainstream classroom inclusion, of Gordon Porter and his followers with the NBACL.  This father of a son with Autistic Disorder, and profound developmental delays learned long ago that Mr. Porter's  regular classroom is not appropriate for my son's learning requirements. It caused him harm and resulted in self injurious behavior repeated, severe biting of his hands and wrists. Today he is very well accommodated by a flexible inclusion which sees him receive his instruction in a quiet area outside the regular classroom.  He starts his day, has lunch, and has friends in a resource center in his high school with other students with challenges, challenges which Gordon Porter's full inclusion model would not accommodate.  He attends many events with his group from the resource centre and he loves, he absolutely loves going to school.

On my son's behalf and as a representative of the Autism Society New Brunswick I participated in the MacKay and Ministerial Inclusion reviews.  During these proceedings I was approached by teachers who thanked me for speaking out for a flexible model of inclusion.  Some children with an Autism Spectrum Disorder can function in the regular classroom, some can not.  Teachers can see that in their daily work, in respect of autistic students and others with severe challenges. Teachers though,  like most employees, know which way the wind blows where they work.  They know that if they preach the full inclusion gospel according to Gordon Porter they will be viewed favorably by the higher ups in the education department and the de facto education department ... the New Brunswick Association of Community Living. They know that if they publicly criticize full inclusion their careers could suffer.


My experience during the inclusion review proceedings has been replicated after I have spoken publicly on television and radio.  I have been approached by many teachers who told me that they and their colleagues support my efforts in speaking up about the shortcomings of full (extreme)  inclusion. I have been encouraged by many teachers to continue critiquing the full inclusion model which governs the mindset of those who determine how our children will be educated.


I don't expect anyone in the office of the Minister of Education and Early Childhood Development or at the "bricks and mortar" building of his colleagues at the NBACL to believe what I have stated.  They do not accept actual direct evidence that conflicts with their full inclusion model and they will certainly not accept my hearsay evidence based on undisclosed witnesses to what actually happens in our regular "inclusive" classrooms. The full inclusion true believers simply ignore such evidence and blame problems on the students themselves or argue that more resources are needed in the classroom under the guidance of classroom teachers.  Then everything will work smoothly.


The full inclusion model of Porter and the NBACL is not an evidence based approach to education.  It is at best a  feel good philosophy.  At worst it is an illusion.  The full inclusion illusion.  One that can literally cause harm, mental, emotional, even physical harm, to some children for whom it is not an appropriate learning environment. This father of a son with severe challenges knows it.  The teachers who work on the front lines educating our children also know it.


The attached document is the 2005 report of an executive committee of the New Brunswick Teachers' Association which describes New Brunswick schools as being in a state of crisis.  The NBTA's report talks about the classroom composition concerns expressed by the teachers they represent but denies that the issue is classroom composition; the issue for the Association is the need for more support in the classroom.   If you look under the politically correct tap dancing of the NBTA's report though there is an honest recognition in many of the statements of its' members that classroom composition is in fact the issue.  I have posted the 5 page summary of the committee's recommendations following my comments in case the document is removed from the NBTA web site in future. 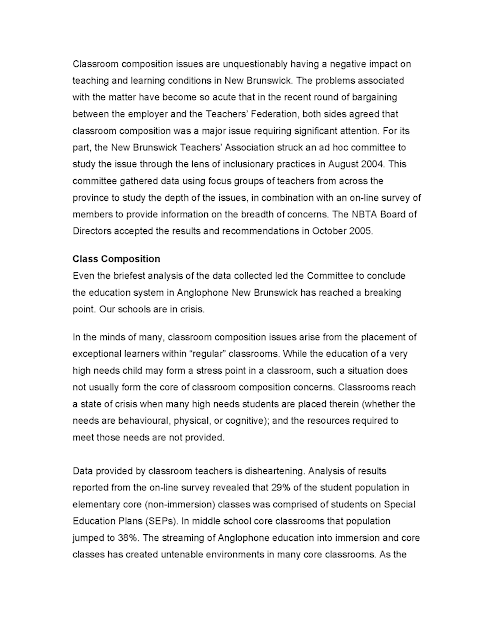 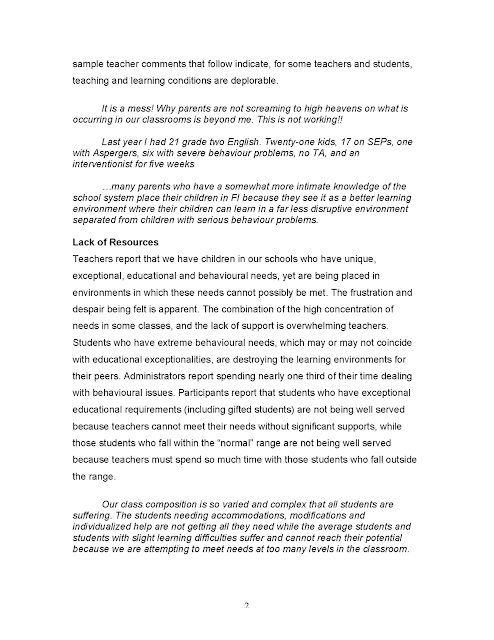 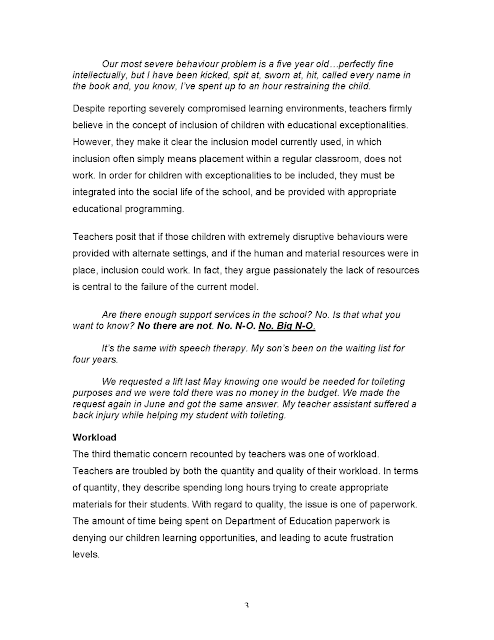 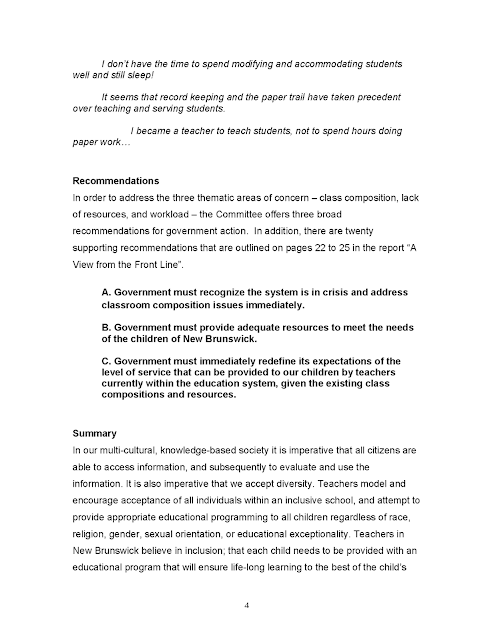 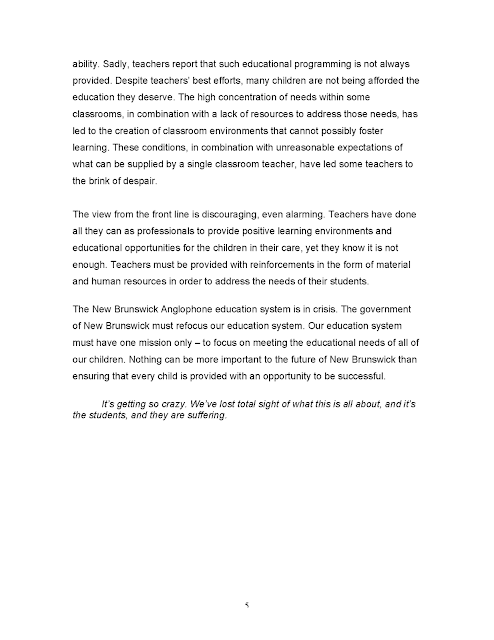 The Toronto District School board just pulled their EA's to fill the ECE positions in McGuinty's Full day daycare (aka Jk/SK program) except pretty much those in self contained. They don't have enough support now... how long until they use McGuinty's new (this year) anti-bullying legislation to remove the disabled kids entirely from the board??

They are the worst so far... how long until the rest follow?? For a variety of reasons... aka lack of appropriate placement... We will be keeping ours home in another year once he's finished in this room.. starting gr 7. It's the best around. I still have issues but he's happy and learning. But unless you want respite there's nothing and I'm tired of having to prove that a child with expressive language difficulties (aka talking to strangers) has a brain.

Actually what's most frightening is the lack of lobbying to keep the EA's in the school's.

There is a straightforward and effective rebuttal to this, the "I" in IEP.

Programming and services for a student receiving special education services cannot be predetermined.

A district wide effort to disregard this could elevate complaints to the level of litigation, bypassing the provisions in IDEA for handling disputes. At the very least a parent can press the issue through this channels and likely win easily.