Thank You To All Who Were Involved With NB`s Incredible Autism Success Story: The UNB-CEL Autism Intervention Training Program 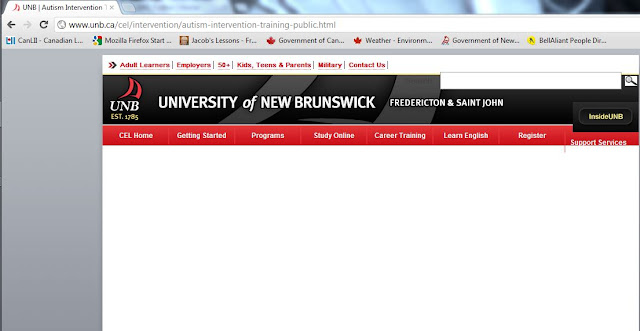 The foundation for the autism service gains that have been made in New Brunswick over the past several years has been dismantled and shut down for good. The screen image above is what I found when I did a search of the University of New Brunswick web site looking to see what, if any, course would still be offered by the UNB-CEL Autism Intervention Training program.  The content section of the screen, however, was literally blank. The UNB-CEL Autism Intervention Training Program is no more.

I was aware for some time that the Alward-Carr-Porter team would not continue to train education assistants and resource teachers through the program.  Autism training will be done "in house" by an education department hierarchy that resisted the program in the first place because it wasn't their project and because they thought it cost too much.  Now pre-school early intervention autism workers will no longer be trained at UNB-CEL either.  Apparently Minister Carr and his combined education-early childhood development team feels that it can do better by consulting experts to instruct our autism intervention agencies on how to provide their own versions of in house early autism intervention.  Minister Carr and Gordon Porter  will call the services they oversee evidence based but an evidence based autism intervention requires a level of quality and integrity that in house training subject to conflicting adult interests is unlikely to meet.

The UNB-CEL Autism program arose as a response to determined advocacy by parents of autistic children.  The program provided NB`s autistic children and students with quality and integrity in the intervention and instruction they received.  Former Premier Bernard Lord responded very personally, and very constructively,  despite the at times combative nature or our advocacy, to our requests.  His government looked for service providers that could provide the necessary early intervention services.  Rather than import and pay huge fees to import services from Ontario a steering committee of various autism professionals, academics and parents involved with autism issues thought it would be a good idea to develop a program using local expertise.  Premier Lord, and after him Premier Graham,  agreed and UNB-CEL provided the autism training for the services our children needed.

Anne Higgins, a brilliant administrator who at that time was with the University of New Brunswick was a key part of the group that founded the UNB-CEL Autism Intervention Training program.  She put a tight organizational plan together and implemented it  with incredible efficiency.  UNB Professor Emeritus (Psychology) and clinical psychologist Paul McDonnell and UNB Psychology professor Barb D'Entremont led the team at UNB that developed the content for the program.  Private autism agencies were established and the UNB-CEL Autism Intervention Training program was used to train early autism intervention and clinical supervisors for New Brunswick's two official language groups.

New Brunswick parents of autistic children advocated for an extension of the UNB autism training to the school system with requests that teacher assistants and resource teachers working with students with autism also receive the UNB autism training.  Both Premier Lord and Premier Graham, in direct discussions with representatives of New Brunswick's autism community, responded positively.

The training of early intervention and education personnel working with autistic children and students met with fierce resistance, some of it from career bureaucrats in the higher echelons of the Department of Education and some of it from New Brunswick's inaccurately characterized "inclusion" and "community" movement.  Now with Minister Carr and NBACL inclusion icon Gordon Porter in charge of both early childhood development and schools the UNB-CEL autism training is no longer wanted.   The foundation of our autism gains in recent years has been abandoned. My comments are gloomy but they reflect current realities under this administration.

I would like to end this comment on a positive note though by thanking all persons involved with the UNB-CEL Autism Intervention Training Program, particularly Anne Higgins, Paul McDonnell and Barb D`Entremont.  I would also like to thank all the parents whose efforts in advocating for early intervention and education assistance for our autistic children led to the establishment of the UNB-CEL autism training.  Without determined, focused autism parent advocacy there would have been no UNB-CEL autism program. Thank you all.
Posted by Unknown at 6:13 am

This is a sad day for Autism in NB. As hard as it was, I was proud to be a part of it as one of the parent advocates.
UNB-CEL training set the bar, for a standard of practice.. and yes people failed, as they were not able to meet the standard. Only thoese that 'could' passed. with the now 'in-house' training thru the Dept of Education...no one will fail..there will be no accrediated standard...even those that shoud not be doing this sort of work will 'pass'.
I am very disappointed!!

The education higher ups and the full inclusion ideologues win in the end - to the detriment of NB children with autism disorders.

I am terribly sorry to see what sounds like a truly beneficial program has been shut down. It's not like there's a tremendous overabundance of resources available for training, I know this from my own experiences here in the states. I've spent a lot of time at KKI with my children and learned a lot.
I'd advise you to be wary of Minister Carr's intentions and watch what he does closely. I don't know how they do things in NB, but here allowing the overly religious to get involved in autism care and therapy has been problematic. They think autism can be prayed away, doesn't qualify as a disorder, is demon possession there is a whole host of stupid and damaging beliefs that have resulted in abuse and deaths. They tend to want to treat autism with religion instead of science. I'm sure I don't have to tell you how disastrous this can be.

Thank you Harold, and to all the parents involved who demanded a standard to be set. Those of us involved in the program (myself included) have come to appreciate what a good system NB had developed, with most of it being thanks to advocating parents. We will continue to strive for quality, evidence-based interventions in the early intervention and school system on behalf of the all the families who have committed so much to this goal. Keep being vocal, don't give up -- I certainly won't be!

Anonymous said...
This comment has been removed by a blog administrator.
2:00 pm