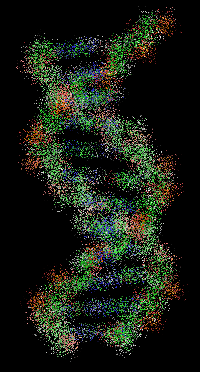 Autism, it's gotta be genetic, even if we can't see the evidence

"Researchers say they have identified gene mutations that contribute to autism in three separate studies. The mutations identified were rare and aren’t necessarily present in the parents, only the offspring, which has made finding them difficult for scientists.     [Emphasis added - HLD]

“It just goes to show how complex the genetic architecture of autism is,” says Thomas Lehner, chief of the NIMH Genomics Research Branch, which funded one of the studies and helped to create the Autism Sequencing Consortium. Together, the studies allow scientists to estimate for the first time that some 500 to 1,000 mutations are likely involved in autism, Lehner tells the Health Blog. Abstracts for the studies, which were published in Nature, can be found here, here, and here.

Notwithstanding the lack of any specific identifiable genes directly connected  to autism disorders researchers continue to push their beliefs that autism is primarily genetic.  Actually what they are really saying is autism is a disorder found in humans with different genetic makeups for which .... however ... there is no need to devote research dollars to conducting serious environmentally focused autism research.  After all if man made toxins are involved in any way in causing or triggering autism disorders then presumably corporate profit making ventures could be put at risk.  Better to mention paternal age again and invent a new genetic paradigm to explain why, notwithstanding the lack of any real evidence, we have to believe, we must believe, that autism is genetic.  Profits depend on us being devout in our "autism is genetic" faith.  Oh and by the way autism is not really rising despite changes in estimates, in less than two decades from 1 in 500 to 1 in 88.

The explanations for the failure to identify specific genes connected to autism are beginning to sound funny.  Or they would be funny if autism research wasn't a serious matter for those who are, or whose children are, severely impacted by autism disorders.

While parents and researchers calling for more environmentally focused autism research are demeaned or, at best, ignored, the autism research community by and large remains unwavering in its devoutly held faith that autism is, autism has to be, genetic.

I prefer the reason of the common man to the rationality of lessor minds.

You do it all for Conor. Thanks for expressing it.

I think I'm misunderstanding your reference to "genetic" in this context? My understanding was that there were some known genetic causes of autism (I wrote a post on a couple of them a while back http://autismandoughtisms.wordpress.com/2011/08/04/genetic-origins-of-autism-when-is-autism-not-autism-fragile-x-and-rett-syndrome/ ). While I agree that some cases of autism do appear to be caused by "environmental" insults (such as diseases during pregnancy and certain medicines during pregnancy), there appears to also be clear examples of genetic causes. I can only think I've misunderstood what you mean by genetic here?

I did not argue in this specific comment about what does cause autism. My belief based on what I have read to date is that autism involves genetic environmental interaction. The essential point of this comment based on a recent example is that there really isn't much evidence to support the often stated and overstated belief that autism is "primarily" genetic even though autism research dollars have been dedicated overwhelmingly towards genetic autism research with precious little towards environmental autism research.

Apart from research dollars genetic autism studies are rarely subjected to any critical mainstream media analysis, or critical analysis by so called "science bloggers" in the same way that environmentally focused studies are criticized.

In this example of the article states as I emphasized:

"Researchers say they have identified gene mutations that contribute to autism in three separate studies. The mutations identified were rare and aren’t necessarily present in the parents, only the offspring, which has made finding them difficult for scientists."

Aren't necessarily present in the parents, only in the offspring? Difficult to find?

In other words the studies did not find evidence to support a genetic connection. Yet they are hyped as demonstrating the "complexity" of genetic mutations?

Were you able to gather any information from the article as to what caused the so called genetic mutations?

Continuing to accept on faith that "autism is primarily genetic" is not justified based on evidence to date. It is long past time that autism research dollars were more evenly divided with more money being spent on researching possible environmental causes or triggers of autism disorders.

I better understand the point you were driving at now, thank you for clarifying that for me.