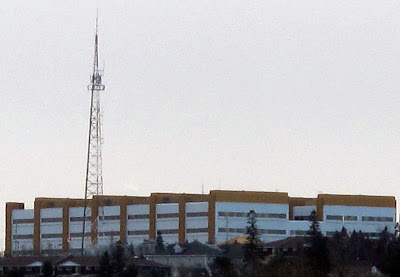 Dr.Everett Chalmers Hospital,
Fredericton, New Brunswick
One of the many controversies that mark discussions of autism disorders is the question of functioning levels.  Some high functioning persons with autism and Aspergers object to the notions of low and high functioning autism.  Those who  claim that a reference to low functioning autism is not founded in "science" do not provide any credible scientific authority for their beliefs. Nor do they usually make reference to daily real life situations of the kind experienced this week by my severely autistic, low functioning son Conor.  Conor had to undergo dental procedures at the Dr. Everett Chalmers Hospital, the "DECH" as it is often described locally,  and he did very well throughout the process. The fact though that he had to be placed under a general anesthetic in a hospital setting for procedures which most people would undergo with a local anesthetic in a conscious state in their dentist's office arises because he is severely autistic and it would be too risky to his safety and well being to have a dentist do extensive filling work while he was conscious.
In this case the severity of his autism disorder also precluded use of another local hospital in nearby Oromocto. This meant a longer wait for the procedure than if the Oromocto option had been open to him. The Oromocto hospital was used three years ago before his growth spurt which now has him standing a very solid 6' 1" as measured during Wednesday's preparatory procedures at the hospital. The dental surgeon who performed the procedures explained that Conor because of the severity of his autism condition AND his current size was now considered too big a risk for the Oromocto hospital.
To prepare we called in advance and spoke with hospital staff about arrangements  including a quiet, private waiting room area.  We also spoke about it with Conor well in advance making sure he knew he would not be going to school that day.  Conor loves school and a surprise cancellation for any reason such as weather can be difficult for him. To ensure as positive an outcome as possible at the DECH it was necessary to prep him for what we described as a Hospital Adventure.
All went well, and then some, with Conor enjoying Mom and Dad's company.  He also actually seemed to enjoy the attention of the several nurses, the anesthesiologist and the dental surgeon.  I was permitted to gown (no pictures were taken of me wearing the hospital gown and hat) and accompany Conor to the OR,  hold his hand and calm him while the IV was inserted and  he drifted off to sleep.  Before that point several nurses were attending to him in the OR and he thrived on their attention barely noticing Dad standing there holding his hand. There was some blistering and swelling of his lower lip (all now cleared up) and some very mild nausea after the operation but our big strong boy walked out holding Dad's arm without the need of a wheelchair.  A trip to the Burger King drive-through and some cheese sticks and Conor was happy heading home.  Conor spent the afternoon on the living room couch ... the cozy couch ... with lots of pillows and blankets and lots and lots of attention from Mom and Dad for the rest of the day.  He loved every minute of it.
We were proud of how well Conor did  Wednesday on his Hospital Adventure.    But we don't lose sight of the underlying realities.  We love our Conor and practice reality based autism acceptance, a form of acceptance which recognizes that autism is a disorder with different functioning levels and different accommodations for daily functioning levels.  Failure to recognize those different functioning levels is nothing less than discrimination practiced by those who should know better.  Because we do recognize the realities of Conor's autism disorder, and his functioning levels, we can help him have positive outcomes as occurred this week. Because we do recognize his functioning level realities we can free him up to succeed as he did this week to our great joy.
The next day Conor even felt good enough to tease Mom and Dad with requests for another "Hospital Adventure". As soon as we said yes to another Hospital Adventure Conor would laughingly  withdraw the request replacing it with a  request to go back to school.
To each their own.  In our house we embrace the Joy of Conor while practicing reality based autism acceptance, acceptance which recognizes the severity of his autism disorder and the limitations it imposes on his daily functioning.  As birthday 16 approaches next February we figure we have a pretty good handle on how to help our son, how to appreciate him and the joy he brings us. Reality based autism acceptance "functions" well for us and for Conor.
Posted by Unknown at 2:10 pm

Glad it went well. I have found more and more as the years go on people/prefessionals are taking autism seriously and are trying to accommodate. There's always the one's that can't be bothered but I try to find someone who will. I liked our other dentist but the waits were awful. This dentist lacks social skills but if there's a problem we're in and fixed. I put up with the social skills for the quick fix.

We've been there, done that twice now. Once in the city, once in the county hospital. Pro's and con's to both but now I know what to ask and what we need. This last time we got gravol and instead of a very sick child... we went to McD's when it was over for lunch.

Happy to hear it went well...and understand how challenging such "basic" procedures are. We have to do the same with Sophie. Hurray for Conor! Of course he loved the nurses! ;)

Wonderful news, and glad to know his lip cleared up.
Harold, you may want to send this to the Day-op at DECH...they are a great bunch back there.

Merry Christmas to the Doherty clan! We are taking in the Best Buddies hockey game on Thurs night...will Conor be there?

The support you guys provided from start to finish is so essential and often a missing ingredient in such situations. But it makes all the difference.

The trauma of providing Alex with dental work trigger an artile for me, and the article was so well received that I have been asked to do another one like it.

You're completely right that functioning differences have real, everyday impacts on quality of life and what acceptance means.

With Willy, we can talk him through it, show him pictures, prep him, cope with his anxiety and then just do it. Those strategies don't work with Alex. Like Conor, he needs more.

That is the reality. Functioning levels--however arbitrary and fluxtuating they are--do matter. They aren't the only thing that matters, but they do matter.