The Autism Enigma: The Bacterial Theory of Autism 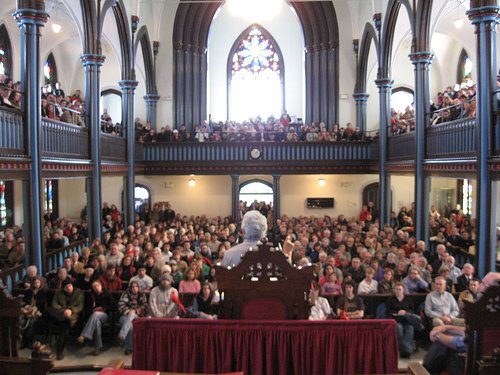 
When David Suzuki speaks people listen as shown in this photo by New Brunswick  blogger Charles LeBlanc taken in the United Church near my office in downtown Fredericton.  As you can see the church was, literally, filled to the rafters. David Suzuki is one of the most trusted voices in Canada in explaining science and the world in which we live.


On Thursday December 8 David Suzuki will be presenting the Autism Enigma on "The Nature of Things".  I have  no idea what will be said, what perspectives will be offered, or whether I will agree with all, or any, of what is said,  but, because it is David Suzuki narrating, I will be shocked if it is not a well informed, balanced and objective discussion of the subject. This "autism dad" will be listening. I encourage others with an interest in understanding possible causes of autism disorders to do the same.
The following press release was provided by Laurie Mawlam, Executive Director of Autism Canada:

(CORRECTION NOTICE - The Autism Enigma will air at 8 pm Atlantic, not 9 pm as I had previously indicated. HLD)


Available for phoners: Marion Gruner, Dr. Derrick MacFabe of University of Western Ontario, Dr. Emma Allen-Vercoe, Microbiologist at University of Guelph.
TORONTO November 7, 2011. THE AUTISM ENIGMA, the new documentary from the award-winning Cogent/Benger Productions, tackles one of the most contentious issues in medicine today: the various, and often conflicting, hypotheses about autism’s cause. It airs on CBC's "The Nature of Things" on Thursday December 8, 8 PM (ET/PT)(8:30 PM Nfld)(8 PM Atlantic),  with a second window on December 15 (10PM ET/PT. 10:30 Nfld.)(11PM Atlantic).


The film presents the fresh perspective of the “Bacterial Theory” of autism. Director Marion Gruner (a new mother who decided to investigate autism rather than just worry) along with co-director Christopher Sumpton, went beyond celebrity-endorsed theories and common assumptions to make new research accessible and understandable to all parents.


Autism is the fastest rising developmental disorder in the industrialized world. Even accounting for better diagnosis, its numbers have increased by an astounding 600% in the last twenty years. Even more disturbing is that science cannot say why. Research is inconclusive, but the emerging theme is that autism, while possibly stemming from genetic vulnerability, is triggered by environmental factors. Is something in our Western lifestyle proving too much for children to bear? Some say it’s the canary in the coalmine. Many say it’s an emergency.
Meanwhile, 70% of children with autism exhibit severe gastrointestinal symptoms, prompting some microbiologists to direct their research to an unexpected place - and ask whether autism actually begins in the gut.


The Autism Enigma looks at the progress of an international group of scientists examining the gut’s amazingly diverse and powerful microbial ecosystem for clues to the baffling disorder, and the extraordinary efforts of parents who have been relentlessly pushing science forward in hopes of finding answers for their children’s condition.


The Autism Enigma is a Cogent/Benger Productions production made in association with the Canadian Broadcasting Corporation and ARTE France, and with the assistance of The Canadian Film or Video Production Tax Credit.


Robin Benger and Christopher Sumpton teamed up in 1997 to produce In Security for the CBC, which then led to Eastside Showdown for the NFB. Cogent/Benger Productions was formed in 1999 to continue in the same vein, producing relevant, creative documentaries such as Sex Scandals in Religion, Five Roads to Freedom, Pedal Power, Porndemic, Pharma Sutra, China’s Leap of Faith, How To Stop a Hurricane, which received  the innovation prize at the Pariscience Film Festival,  Money & The Maker, The In-Between World of MG Vassanji, Destiny: The Life & Times of Paul Anka and Wolverine: Devil Of The North. C/BP's programs have been seen on Canadian networks, such as CBC, CTV and Discovery, as well as internationally.
Posted by Unknown at 2:30 pm

Email ThisBlogThis!Share to TwitterShare to FacebookShare to Pinterest
Labels: Dr. Derrick MacFabe, The Autism Enigma, The Nature of Things

I can watch it at 9pm on the Atlantic channels. Will actually get dibs on the remote that night after the kids go to bed - dh is at a 2 day mtg. Rarely watch tv. Post again Thurs morning b/c I will forget - please. I'm not a big David Suzuki fan... ok, I'm not a fan at all... but I'm curious what they have to say. My eldest was severely casien intolerant. He eats some now but they still drink soymilk (their preference) I truly believe this to be, maybe not a "cause", but my kid was stoned and our tiny bit of butter a week later oops was immediately followed by a miserable (to be kind) 24hrs... You can never convince me that in some children it doesn't play a large roll in their autism issues.

Just finishing up on "7 keys to unlock autism" - good overview for teachers, otherwise useless for parents BUT, they do represent about 80% of my opinions on autism. Will be starting "Challenging the myths of autism" - just started the intro, again not perfect BUT appears to hit many of my opinions/discoveries. Will see what I think at the end.

Thanks for the post. I would be very interested to hear your views and opinions on this documentary once aired. Dr MacFabe in particular talks about some interesting things on the whole gut bacteria story: http://cogentbenger.com/autism/interviews/macfabe-interview/

I watched the program with interest on CBC. Then, a few days later I read this information in an alternative health newsletter I receive:
“It may sound disgusting, but fecal microbiota transplant (FMT) is actually very simple. It involves taking donor feces (the donor is typically a spouse or relative) and basically transferring it to the patient during a colonoscopy. The benefit? The patient receives a transplanted population of healthy flora that can go to work correcting any number of gastrointestinal and other health problems.
Dr. Mark Mellow, medical director of the Digestive Health Center at Integris Baptist Medical Center in Oklahoma City, presented research at the American College of Gastroenterology (ACG) annual meeting in Washington, D.C. that found fecal transplants led to rapid resolution of symptoms in 98 percent of patients with Clostridium difficile (who hadn't responded to multiple previous treatments) -- an infection that is often resistant to antibiotics, is often debilitating, and can be fatal.”
Sounds promising. Here’s a link to the newsletter article:
http://articles.mercola.com/sites/articles/archive/2011/12/05/gut-bacteria-for-your-health.aspx?e_cid=20111211_WNL_art_5