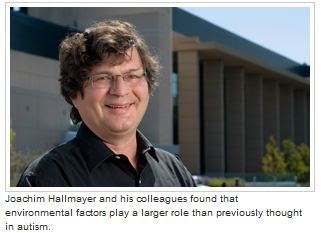 Joachim Hallmayer MD, Stanford University
Following is the press release I received setting out what Autism Speaks considers to be the top 10 autism research achievements of 2011.  Personally I do not think every one of these projects should be on a list of top 10 autism research achievements but this is the Autism Speaks list and I reprint it in its entirety here without any editing by this humble autism dad.  I have added some bold highlighting to emphasize what I feel is truly the most significant achievement the California Autism Twins Study (CATS) ... a large study providing further confirmation that autism causation results from gene environment interaction.
As the Autism Speaks press release indicates the CATS study is a game changer in our common understanding of what causes autism.  This study has further hastened the demise of the  "it's gotta be genetic" mindset, the belief that autism is an entirely genetic disorder, that has dominated public understanding of autism causes, dominated autism research funding and hindered discovery of environmental, particularly prenatal environmental triggers of autism disorders.

Thanks for the post. Compared with previous 'top 10' research events hosted by Autism Speaks down the years, there are some subtle differences appearing with regards to the 'emerging' role of environment and the (variable) synergistic relationship between genes and environment in the highlighted studies. Tom Insel's 'Autism Spring' post really sums up this year - that and as you say, the 'game changer'.
Jon Brock on Twitter made 2 important points on the 2011 list: (a) no intervention study this year, and (b)perhaps it is too early to say what the highlights of 2011 actually were at this point. On both these points, I think about the recent double-blind, placebo-controlled trial of a vitamin/mineral supplement by Jim Adams and colleagues which whilst methodologically rigourous was perhaps published too late in the year?
Of course with regards to the 2011 list the old adage adapted from Mr Lincoln might come into play: "please some of the people some of the time.."

Well, just as long as Laurent Mottron's research isn't in the top ten.

Missing from the top ten scientific achievments in autism research may be the most important scientific achievement published in 2011. It's understandable why this study was omitted since the study did not come from autism researchers but came from the field of evolutionary biology and directly questions the widespread belief among the research community that autism is the most heritable of the developmental disorders.

This is an open access paper and the full text is available at the following link:


Deviations from population norm copy numbers and rare chromosomal mutations in the genetic disorders can occur either as a new mutation, absent in the parents, with a low recurrence risk (sporadic) or be inherited by a DNM traced to an unaffected parent or earlier founder in the pedigree that carries a higher recurrence risk (familial). Studying the consequences of genetic syndromes cannot ignore origins. All males and females generate sperm and egg mutations. Molina et al (2011) studied sperm mutations in healthy male volunteer donors focusing on three mutations identified in individuals with a genetic syndrome that also have high ASD risk. The three sperm mutations that were specifically examined were: 7q11.23 (Williams Syndrome), 15q11-13 (Prader-Willi Syndrome), Di George/velo-cardio-facial (22q11 deletion) syndrome and most genetic and epigenetic cases of Williams Syndrome, Prader-Willi Syndrome and 22q11 deletion Syndrome are de novo mutations in contrast to being inherited events.. The sperm mutations were sporadically found in the sperm of the volunteer donors. One marked difference between the human male and female is that there are many more germ line cell divisions in the life history of a sperm relative to that of an egg. Furthermore, the frequency of sperm mutation may increase with the age at which the sperm is produced. Sperm or egg mutations is explanatory of why monozygotic twins (MZ) are concordant and dizygotic (DZ) twins are discordant in Rett Syndrome and Downs Syndrome. These sperm (or egg) mutations are random events that can strike any family at any time without any discernible reason other than pure chance (Molina et al 2011 ) ( Thomas et al 2006 ) ( Crow 2000 ) ( Kinney et al 2010 ) ( Geschwind 2008 ) ( Ellegren 2007).

This study which needs to be replicated may have answered two vexing and increasingly asked questions (a) why hasn't autism become extinct and (b) does the frequency of sperm or egg mutations increase with advancing parental age and furthermore this study joins the chorus in asking 'Where did the heritability go?

I am wondering why no one has cought up with the most recent publication from a company named Curemark. It appears as though they are on the cusp of having a digestive enzyme that treats the core symptoms of Austism available soon. Mostly all other medications available seem to sedate or impair the kids.

The recurrence risk of pervasive developmental disorder in siblings of children with autism is 2% to 8%; and it rises to 12% to 20% if one takes into account the siblings showing impairment in one or two of the three domains impaired in autism respectively.5 Moreover, several twin studies have suggested that this aggregation within families is best explained by shared genes as opposed to shared environment. Interestingly, the variation of autistic traits in the general population has been shown to be highly heritable, at a similar level of genetic influence to autism itself, even though the results are heterogeneous (heritability 40% to 80%).These results have led to a huge effort in research to try to unravel the genetic factors underlying the disorder. However, two recent twin studies have provided intriguing results. One study showed that monozygotic twins had higher concordance rates than dizygotic twins for ASDs, attention deficit hyperactivity disorder (ADHD), developmental coordination disorder, and tic disorder with differences in cross-disorder effects between monozygotic and dizygotic twins, raising the question of the specificity of the underlying genetic factors. consultas medicas online consultar medicos online medicos online doctores online psicologos online psiquiatras online chatear psicologos online preguntar con psicologos online consultas psicologia online consultar psicologos online abogados colombia online abogados online consultar abogados online abogados españa online medicos especialista online abogados mexico online dentistas online veterinarios online consultas online