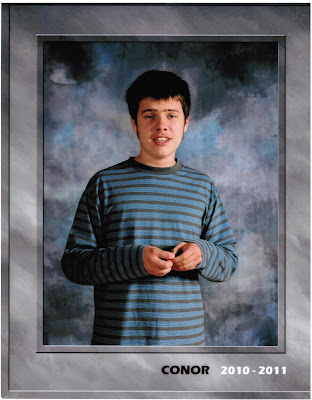 Conor Doherty, one of Autism's Vast Majority of Invisible Autistics,
brings joy to Mom and Dad in the Christmas season and throughout the Year.
My 2011 Christmas wish is that Autism's vast majority, the 70-80% with autistic disorder and intellectual disabilities,  will lose their status as autism's invisible autistics. It is a wish  that will grow farther from fulfillment as the American Psychiatric Association stands poised to obliterate the original autistics and replace them in the DSM5 with its Aspergers Spectrum Disorder hidden under the label Autism Spectrum Disorder.  It is a big wish and one which will not be easily fulfilled but I will continue to do my best as the father of an autistic 16 year old son with intellectual disabilities and behavioral challenges to fulfill that wish.
The world knows very well the high functioning adults with autism disorders, some of whom were only diagnosed with "autism" disorders as adults, some of whom have an Asperger's diagnosis, some of whom relish their autism label but object to being characterized as having a mental  disorder or ever a medical disorder.  The barely autistics are studied with fMRI scans, they are featured in fashion spreads in New York magazines, they are given seats in important government organizations like the IACC, and important autism charities like Autism Speaks, they presume the right to speak on behalf of the severely autistic, the vast majority with intellectual disabilities who will live their lives dependent on the care of others, many in institutional facilities with no significant continuing education or recreational opportunities.
I wish Autism's Vast Majority of Invisible Autistics the right to be seen,  the right to have their existence acknowledged, without shame, without prejudice and without those who do not know them or their challenges speaking on their behalf. This Christmas season I wish my son Conor and all other invisible members of Autism's vast majority happy, healthy lives.
Posted by Unknown at 9:50 am

Harold, we have to all keep working together and praying that your wish, the wish of many, will come true.

As the mother of a (possibly) highly visible autistic, I concur. I don't understand what is going on, but there is a political/monetary reason for it...of that much I am sure.

Throw in some big, "sciency" words and nobody knows the difference. But still, my hope for the New Year is that the developmental trajectories are so similar versus typical development...answers may be found to benefit all.

amen to that Harold.