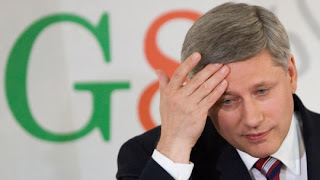 I have attached an email and  blog comment I posted on May 9, 2007 addressed to Prime Minister Stephen Harper in which I expressed the hope that he would open his heart (I assumed he had one) and his mind (I didn't know it was locked solid) and help autistic children wherever they reside in Canada.
Since this comment in 2007 the numbers of children estimated to have an autism spectrum disorder have increased, by CDC estimates, from 1 in 150 to 1 in 110.
As recently as this election campaign James Moore of BC, a cabinet minister in the Harper cabinet, has expressed the views that autism is not a disability and that persons with autism are simply an interest group.
Notwithstanding the presence  in the federal Conservative party of Mike Lake,  a dedicated father of an autistic 15 year old son,  the Harper government  understanding of autism disorders has regressed since my 2007 letter.
May 9, 2007
Prime Minister Stephen Harper
Dear Prime Minister
I am writing to you as the father of a severely autistic 11 year old boy living in Fredericton, New Brunswick and as an autism advocate for the past 8 years here in New Brunswick. Recently I was disappointed, bitterly disappointed, by two actions by your very tightly controlled government – the rejection of MP Shawn Murphy’s motion to amend the Canada Health Act to ensure autistic children, wherever they reside in Canada, would receive government funded treatment for their autism. Canada as a nation has long ago rejected the notion that accidents of geography should determine whether Canadians receive life sustaining or life enhancing medical treatment.
The arguments about constitutional jurisdiction advanced in justification are specious and you sir, with all due respect, know that. Canada has long operated on the basis of a model of cooperative federalism which has developed many legislative tools to ensure that narrow constitutional boundaries do not impair the quality of life in this great country. I will mention no specific examples because there are far too many for this to be a serious issue of contention.
Autism is a serious neurological disorder borne by 1 in 150 Canadians by currently accepted estimates. It also impacts on the lives of parents, siblings, grandparents and other caregivers. There is no known cure but there is a widely acknowledged, evidence based treatment available, Applied Behavioural Analysis, or ABA, which is supported by literally hundreds of studies, including recent studies, which document the effectiveness of ABA in improving the IQ, the linguistic skills and comprehension, the ability to function in the real world, of children with autism. In my son’s case, even with the limited ABA therapy which was available in New Brunswick at the time because of a shortage of trained personnel, he has made tremendous gains. From a child who could only scream and tantrum he became a child who can communicate using words, who is reading, albeit at a level below his chronological age, and who in fact almost daily pulls out books on his own initiative to real aloud for his own enjoyment. This is the ABA which parents seek across Canada, the USA and the world for their autistic children.
There are those who oppose ABA based on personal preferences, outdated and ill founded misconceptions about what ABA involves and quite simply on the basis of paranoid, conspiratorial beliefs that somehow they as human beings, as functioning adults, will be deprived of their personalities if someone else’s autistic children are taught fundamental living skills by use of ABA. They make stretched and tortured arguments about ABA turning children into robots. This is nonsense as they happy joyful pictures of my son which I will provide a link for in this letter can rebut with finality. They also make disingenuous attacks on the studies which have documented ABA based gains for autistic children ignoring the fact that literally hundreds of such studies exist all showing substantial gains. Critics also focus on costs of providing ABA ignoring the studies that have shown the huge financial savings to government in reduction of service provision over the lives of autistic persons who have benefited from ABA.
I do not actually expect you to personally read this email Prime Minister. I hope though that a conscientious staffer or, through the marvel that is the internet, a family member or friend, will see fit to read this and implore you to take action on behalf of Canadians with autism. You can make a difference in the lives of 1 in 150 Canadians Prime Minister. You can make a difference in the lives of their loved ones and care givers and you can save Canadian governments enormous sums by reducing the level of services required as a result of early intensive ABA intervention.
Please open your mind Prime Minister, open your heart, and do the right thing.
Respectfully,
Harold L Doherty
Fredericton New Brunswick
Posted by Unknown at 9:13 am

A - Health Care is the jurisdiction of the provinces, NOT the Fed's. The Fed's fork out the cash through transfer payments.

B - PM Harper get's 27pg epics from people like me saying that we don't want ABA.

Not everyone wants the same thing. But, if you want a gov't like McGuinty (LIBERAL) that put 1.5 billion so far - last 2yrs and still not fully in place - into putting in full time JK and SK... not a nickel towards disability or special ed of any kind... And everyone remembers the days of NDP leader's Bob Rae being in power...

Just keep voting for the left.

Atleast the right allows you to make your own choices for your own family. The left says you aren't smart enough to think for yourself. They know better than you do.

FW2 thank you again for your comments.

I am aware of your hostility to ABA and your crusade to prevent other people's children from receiving the only evidence backed effective treatment for autism. It is too bad that you feel the need to fight other people's efforts to help their children. No one is stopping you from making your choices as you wish to do to others.

The federal government has been involved in health care since the introduction of medicare a half century ago. I am willing to bet you or someone you know has received medical care under this federally financed health care scheme.

As for the post on which you commented the topic is the fact that your Harper government doesn't even recognize Autism as a disorder.

ABA works. It should not be the only tool, but it works. Being a father of 1 autistic 5 year old son living in Geneva, Switzerland, I have found here the same ideas that ABA creates robots. Autism here is still an issue that is dealt with psychiatric interventions and not seen as a neurological disorder with lots of behavioral ramifications. On a related thing, as a Canadian I do not understand honestly the right and left politics mentioned by farmwifetwo as I think ABA will not do harm, but indeed should be complemented with other interventions. I am not pretending as a parent to put ABA as the only thing to deal with autism. At least in my experience having ABA is a tool, a sort of a door opener to connect with little Brian and explore more things to do together. What for me seems pity being a parent of an autistic kid is the fact that some policians would consider is as an interest group. Sorry, I am just a Canadian taxpayer, asking my government to provide the support a Canadian kid with special needs.