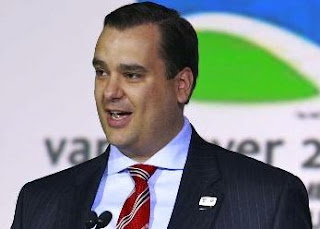 UPDATE: NDP Candidate Mark Ireland who was present at the forum has twice CONFIRMED in a message below that James Moore stated that autism is not a disability.  Mr. Ireland also confirmed that Moore made the statement in a twitter discussion with Ben Brisebois that I have posted on Facing Autism in NB.

Conservative candidate James Moore was asked at Riverside Secondary All Candidates Meeting  in the  BC riding of  Port Moody–Westwood–Port Coquitlam whether he would support legislation to amend the Canada Health Act to include autism treatment (ABA/IBI) under Medicare.
His reply, as reported at Medicare for Autism NOW,  demonstrated Mr. Moore's fundamental ignorance of autism disorders:

"No, autism is not a disability and The Canada Health Act is not for Special interest Groups."

Mr. Moore obviously knows nothing about autism disorders when he states that autism is not a disability.  He might want to visit web sites of agencies such as the Centers for Disease Control and Prevention or the Interagency Autism Coordinating Committee in the US.  Or he could talk to officials at the Canada Revenue Agency who do consider autism a disability for Disability Tax Credit pruposes and specifically mention autism at page 7 of document  RC4064(E) Rev. 10  Medical and Disability-Related Information.
As to why James Moore would define persons with autism as a special interest group or why the Canada Health act does not apply to them his brief dismissal of this serious issue provides no illumination.
Posted by Unknown at 3:34 am

James Moore is the candidate for my riding. Up until now, I was going to vote for him. Not anymore. My son is on the spectrum.

This man is a jackass talking out his ass!!! As the mother of a child with Asperger's, I know that Canadian government class all Autism disorders as disabilities. Are you sure this is the party you want to vote back in?????

To my friends in Canada, please either straighten this man out or keep him from positions of power. We need to have elected officials speaking in reality and not from politically correct terms for autism...

Here I am 100% for Conservatives.. Iam now terrified to vote for them on monday... Never Ceases to Amaze Me just how many uneducated people run for politics.

James Moore you need to educate yourself on the subjet before opening your mouth!

It's scary that someone in political power feels this way. You know by what he said, he made other ignorant people who know nothing about the spectrum come to the same conclusion. I know who I'm not voting for, so thanks for making the decision easier, Mr.Moore.

This level of ignorance, and RAMIFICATIONS of same are absolutely frightening to me, as a parent of a child with autism.

I can assure you, my son has a disorder, he has great difficulty with basic functioning and is non-verbal.

Please remember that well-intentioned social constructs, such as the willfully blind campaigns about the beauty and "genius" of autism, can be and to wit are being extremely HARMFUL to people in need of support and understanding.

The saying goes "ignorance is bliss" but in this case it's pure stupidity. It is quite obvious that he has not taken the time required to learn about Autism or talk to families who have loved ones who are on the spectrum. I shudder to think that there are more politicians out there who think this way but haven't voiced their opinions. I shudder to think how many ordinary people out there think the same way as this idiot.

I wonder what his fellow PC Mike Lake thinks about this, seeing as he is the father of an Autistic child?

Also, if it wasn't a disability, why does my son attend a self-contained class for children on the Autism Spectrum? Said class being provided free through our local school board in one of the local Public Schools.

These ignorant, uneducated views of the PC party TERRIFY me...both as a Canadian and as the Parent of a child with Aspergers.

I beg all Canadians to please vote any other party than PC tomorrow!!!

An hour ago this was posted on MP James Moore's Facebook page:

Leo Gregory posted:
‎
James Moore supported our 2010 inaugural international Naturally Autistic People AWARDS - he does support the development and growth of autistic people in Canada as was demonstrated in October 2010 - his riding is Port Moody

Neither posters deny that Mr Moore stated what witness at the April 28, 2011 all candidates meeting report he said.

FYI reporters want access to audio or video of james moore saying that.

If anyone has the audio or video please contact a few and let them know. For example bc media outlets CKNW and CTV are interested in it. And I'm sure all media outlets would love to cover it.

Media outlets are also looking for people with autistic children to talk to them about how they feel about what James Moore said. If you're interested in getting interviewed, please let them ASAP

So I guess this jerk offs kids are all 'normal' like him? PFFFFT. And his own family is all healthy? Let's wait for the day an autistic child is born in his immediate family...then we'll see if he gets it. ( I truly wanted to swear! ) Grow a brain Mister. (So disgusted!)

If I did not have a seriously autistic son I may also have the perception of autism as anything but a disability. A well known DJ in San Diego keeps telling us his son is autistic and yet offers no description of any behavior or symptoms of autism. He does describe a child who is a picky eater with performance anxiety although he does call in to his fathers' radio show to sing on occasion. Last week he mentioned that a doctor had to be told that his son was autistic and to that the doctor said, "Really? I don't see it. Are you sure?" Apparently there is some confusion on what autism is among parents and their attending medical professionals so what should we expect from a politician.

I'm the NDP candidate for the area. For personal reasons I have an interest in this subject.

I spoke first, then the Liberal remarked many "disabled people" are disadvantaged.

As I remember it, James Moore rebutted him with the comment "people with autism are not disabled".

Make of that what you will. Personally I missed the comment because the Libertarian candidate was spouting even worse!!!

Oh well, at least the publicity - such as it is - will help inform the public. We can but hope. And whatever happens tomorrow I will be keeping up the fight.

not only is Autism a Disability but they do not grow out of it. Aspergers is no different. Being a part of the Autism Spectrum both are severe and require assistance in many areas. My son has Aspergers and without the help he has recieved in the past and continues to recieve he would not be the young man he is today.

In response to this, all I can say is...

I have talked with Mike Lake at some length about autism in Canada. He is a dedicated father of a 15 year old autistic son.

He is also a member of the same party as James Moore. Mike apparently has not succeeded in raising autism awareness in the Conservative Party which now rules Canada.