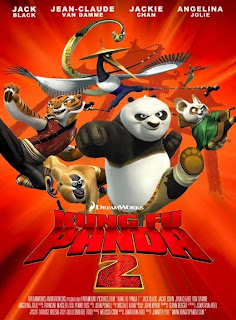 Conor Enjoyed Watching Kung Fu Panda 2 in 3D  ... and so did Mom and Dad

enjoyed the  view on a trail walk along the St. John River
Yesterday was a great outdoors day for Conor with long trail walks in the morning with Mom and early evening with Dad.  He was able to enjoy lots of fresh air and .... always a good thing ... was able to burn off lots of energy.  In the afternoon though Conor, Mom and Dad all headed to the movies to see Kung Fu Panda 2 in 3D.  Conor watched the entire movie quietly with no sign of discomfort.  KFP2 was the latest in a series of theater trips which began about a year ago with Toy Story 3 and Shrek 4.   Conor's movie attendance has been a sign of progress in that he was unable for several years to sit in a movie theater without leaving very early overstimulated and overwhelmed.  He just had to see the Toy Story 3 and Shrek 4 movies though and he started going to the movies, and enjoying them,  again.
School has made a  big difference as well.  Conor had been increasingly, but selectively, exposed to stimulating common environments by his excellent education assistant throughout his middle school years. In his first year of high school part of each day is now spent in a Resource Center and other common environments, the library, cafeteria and a district swimming pool,  where Conor interacts with other students and staff. He recently attended a school outing at the Kingswood bowling facility.  His educational assistant brought headphones but they were not needed and Conor bowled with the other students and had lots of fun.
Conor is 15 and his progress in being able to function in environments with lots of noise and activity has been substantial.  Yesterday it included Jack Black and a cast of prominent actors providing voices for a movie which Conor enjoyed ... almost as much as I did.
Posted by Unknown at 4:27 am

Harold, that is so wonderful! These things can only make life better for Conor. Hurray for your entire family.

We went to Special Olympics on Wed. Was a long day and everyone had a great time.

We're taking the youngest to see Cirque du Soleil on Friday afternoon. Been showing him the trailers on the computer. He was at the same facility earlier this year for Disney on Ice with his class so he knows where he's going and what is expected through the use of social stories.

Get them to take him to SO. They started taking the integrated kids last year and never told us. We're self-contained now but I wish I had known.....

We have little trouble travelling since we always have taken them everywhere.... Well most of the time. I had to get some panic attack shut down pills for the eldest to go to TO for his school field trip and to Scout jamboree. Traffic jams - and TO is a mess - plus severe claustrophobia... quite often is ugly. But I don't view it any different than needing gravol for motion sickness. They are ONLY for a panic attack nothing else. We don't think he'll manage puberty without meds... but I'm not going to be one of those parents who's kid commits suicide and says "I had no idea"....

It is wonderful to read about Conor's progress, and the things he is able to do and enjoy these days! Hats off to the educators (and mom and dad!) for well-thought out, consistent teaching!

thanks for sharing, I love reading about Conor.