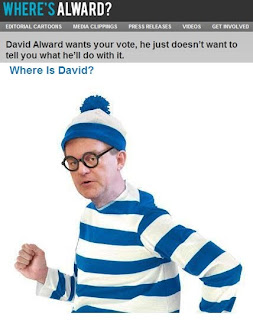 New Brunswick is about to commence another election period.  Now Premier Alward has been silent on autism during his 2010-2014 term but his officials have placed more  restrictions on and made it more difficult for students with autism disorders to obtain alternative education settings outside the regular classroom by imposing the Gordon Porter Commandement #1 that all children belong in the regular classroom, all children must be placed in the regular classroom  The Porter Commandment is totally contrary to all informed opinion and evidence based approaches to educating autistic children.  In addition the Alward government is still banishing severely autistic adults and youth to the Psychiatric Hospital in Campbellton on NB's far northern border with Quebec, far from family members in the more heavily populated south and far from NB's autism expertise in Fredericton.  Where's Alward on autism? The answer is clear as the 2014 election approaches : up to no good.

The New Brunswick Liberal Association has a web site and a twitter account which mocks Conservative leader David Alward by portraying him as the comic fictional character Where's Waldo. The Where's Alward effort aims to prompt New Brunswickers, with a touch of comedy, to ask hard questions about David Alward's positions. Since the site and twitter effort though the Conservative Party has issued its platform and has made a number of other policy statements.


I don't know if it is fair or accurate generally to say that David Alward is absent when it comes to making clear statements of position on various issues. I do know that David Alward has made no statements at all about the 1 in 110 New Brunswickers with an autism disorder or what they can expect from an Alward Conservative government.  Neither David Alward, nor any members of his party, have made public statements about what will happen to early autism intervention programs, Teacher Assistant autism training, or accommodation of autistic students's learning challenges with alternate learning environments ... all areas in which great progress has been during the first Shawn Graham Liberal government.

Would a David Alward government roll back some or all of this substantial progress? Would his government ensure that progress continues to be made in early intervention and education  for autistic children? No one knows because David Alward and his party are not saying.

In the last year of the Graham government discussions moved forward  on the serious issue of adult autism residential care and treatment.  The discussions, with Kelly Lamrock in his role as Social  Development  Minister, centered around the adult autism residential care and treatment  model described by autism expert Paul McDonnell, Ph.D., in the CBC site article Autism Services Needed for N.B. adults. It would be nice if the Alward Conservative Party would commit to the McDonnell model but that would be expecting much from a leader and a party which has no time to even mention the existence of a disorder which affects 1 in 110 New Brunswickers.

I don't know if the New Brunswick Liberal portrayal of David Alward as missing on policy directions is fair or accurate generally.  I do know that, with respect to autism disorders in New Brunswick, it is both fair and accurate to ask ... Where's Alward on Autism Services?
Posted by Unknown at 7:00 am