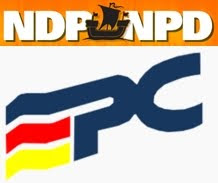 For the  Conservatives and NDP  it seems there is no room on the political lifeboat, in troubled fiscal times, for adults with autism disorders. There has been no public mention by these parties  of the existence of persons with autism in New Brunswick. This is no small point. The US Center for Disease Control has estimated that 1 in 110 people have an autism spectrum disorder. Yet neither  the Conservative Party nor the NDP have made  mention on any public media site that I can find of the existence in New Brunswick of persons with autism disorders or what lies in store for them should the NDP or Conservatives form the next government. Both parties have focused on balancing the provincial books as their primary goals and while some promises have been made neither has mentioned persons with autism.
The last several years have seen very substantial gains made for preschool children and students with autism disorders in New Brunswick.  Autism expert Paul McDonnell has praised New Brunswick as a leader in provision of autism services for preschool and school age students with autism.  But Dr. McDonnell has also pointed out that progress has not happened for adults with autism.  In New Brunswick adults with autism have lived on hospital ward, in psychiatric hospitals and have been shipped out of the province and little has improved over the past 10 years.  Dr. McDonnell has pointed out that we need to invest in adult autism residential care in NB.  The Liberal's Kelly Lamrock had already acknowledged the need to work on autistic adult residential care. Both the PANB and the Green Party of NB have confirmed they would address the issue.  The NDP and the Conservative Party are silent.
I hope I am wrong but it seems  there is no room on the Conservative or NDP agendas, at least  during this election,  for discussion of adult autism residential care.
Posted by Unknown at 12:43 pm