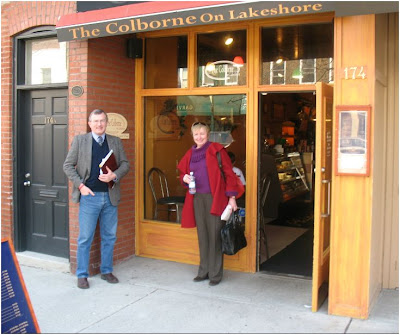 "As a veteran American senator once observed, politicians see the light when they feel the heat. We launched the Two Percent Solution in five ridings in the last elections, and I believe we had some impact on the outcome in two of them. We punched above our weight the first time, and I think this time out the campaign has real potential for democratic renewal. This isn't a partisan effort. It's an attempt to reverse a stupid policy."

As the country awaits Stephen Harper's election call, The Tyee has featured the Medicare for Autism NOW! campaign led by Jean Lewis, business woman, parent of an autistic child and prominent autism advocate, and David Marley, lawyer and veteran political organizer. In the picture above Jean and David are shown in Oakville Ontario on April 19, 2008 where they appeared as part of a line up of speakers detailing the Medicare for Autism NOW! strategy for the next federal election, now expected to be held in mid-October.

The Tyee article is a well written, detailed report on the Medicare for Autism NOW! non-partisan strategy of targeting ridings across Canada with narrow margins of victory in the last election and supporting candidates in those ridings who openly support inclusion of ABA treatment for autism under Medicare. The article also comments on the effectiveness of ABA as an autism treatment and the hodge podge of ABA coverage offered across Canada.

autism
Posted by Unknown at 6:39 am