Autism Promise Breaker - Can He Be Trusted? 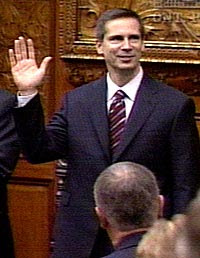 Autism Promise Breaker, Ontario Liberal leader, and current Ontario Premier, Dalton McGuinty, is being ripped for his infamous broken autism pledge by his opponent, Conservative Leader John Tory, in the press release which follows this comment. McGuinty did not just break his autism pledge, he fought tooth and nail the very parents of autistic children he had pledged to help. Can Dalton McGuinty be trusted - by anyone? Ontario voters will answer that question in Ontario Election 2007.

"Can he be trusted?"

Trust has little to do with it. Honesty, integrity, and accountability are what it is about.