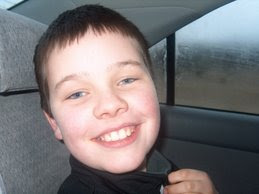 
I have never seen this one before and, on an intuitive basis, I have a hard time accepting the idea that persons with autism display unusual facial asymmetry. But that is the claim of Professor Peter Hammond of the UCL Institute of Child Health who has developed new computer software that compares the faces of undiagnosed children with those with a diagnosed condition that also affects the development of their face, with a 90 per cent success rate. He will describe his work at the BA (British Association) Festival of Science in York on Monday. Professor Hammond's program is designed to assist diagnosis of a variety of genetic disorders including autism.

As described in Innovations Report:

The specially written software is based on dense surface modelling techniques developed at UCL and compares the child’s face to groups of individuals with known conditions and selects which syndromes look most similar. In order to do this, extensive collections of 3D face images of children and adults with the same genetic condition had to be gathered, as well as controls or individuals with no known genetic condition. Each image contains 25,000 or so points on a face surface capturing even the most subtle contours in 3D. The images are then converted to a compact form that requires only a 100 or so numeric values to represent each face in the subsequent analysis.

Once the software has narrowed down conditions with similar facial features, molecular testing can then be used to confirm the diagnosis. Testing for fewer conditions will save money, time and reduce the amount of stress the child and the parents are put under.

So far the technique has proved fruitful, Professor Hammond says: ‘The technique is currently being applied to over 30 conditions with an underlying genetic abnormality. The discriminatory capability of the approach has proven highly accurate in identifying the characteristic facial features of a variety of genetic conditions, including Cornelia de Lange, Fragile X, Noonan, Smith-Magenis and Velocardiofacial syndromes. It has identified unusual facial asymmetry in children with autism spectrum disorder reflecting known brain asymmetry and has helped to identify genes affecting facial development in Williams syndrome.’

Your son's face is much more symmetrical than mine! My little 13-year old cousin (who is autistic) also has a very symmetrical (and beautiful) face. I know its only anecdotal, but I have a hard time believing that too, especially if you consider most people's faces are asymmetrical to some extent. Perhaps they are looking for a particular nuance unnoticeable to the naked eye??

I find it quite likely that a condition so profoundly affecting the brain manifests itself in the face, even if the difference is too subtle to be seen by a naked eye.
"Different" doesn't necessarily mean "bad". About people with Williams syndrome (briefly mentioned in the source) it is often said that they have elf-like faces. After a simple Google image search, I agree and find their faces beautiful. Of course I don't doubt that life is difficult for people with Williams syndrome and their families, but it is good that they look well, because society values appearance too much.

I wonder if it would be useful in the earlier diagnosis of children (at what point in development will the differences appear?)?

Also... what is the 90% figure about? Is the software successful 90% of the the time with just those who have ASD or is the 90% success rate based in "blended samples" of children who have different disorders that are characterized by more marked facial asymmetry...

Hi,my name is Kimmie.I came across your site when I was searching out Cornelia de Lange Syndrome.I livein N.B.I have a 4 year old daughter with CdlS.There are only two children i know of in N.B. with this syndrome because it is so rare.Some of jad's symtoms for CdlS are kinda close to autism.Some people just look at her not realizing there is an actual caring human being inside that wants to relate to them and the world...Come visit her ste sometime and see what jayden's world is all about www.jaydensworldcdls.com
Thanks... Kimmie Bevans