Autism, Intellectual Disability and Seizures, When Together, Constitute ONE DISORDER 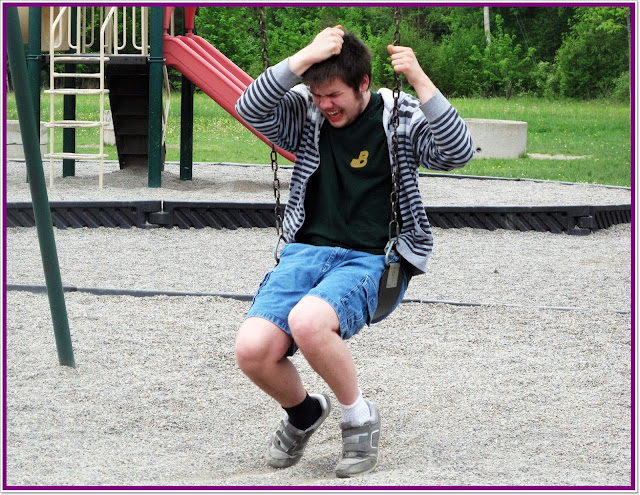 In the picture above, taken 3 years ago my son erupted in sudden self injurious behavior smashing himself violently in the head  after he had been on the swing at his old grade school, Nashwaaksis Memorial School; a split second after he had been very smiling and happy. I captured the image because it was a series of pictures taken with an "athletic" setting on my Canon camera to capture his until then joyful, smiling activity on the swing.  In the commentary below from my January 19, 2008 commentary on Facing Autism in New Brunswick, "Autism Disorder and Impulse Control" I commented on a variation of such sudden violent activity when moments of joyful interaction turn harmful for Mom or Dad.   Seven years after I speculated that my son's sudden impulses of violence towards himself or us were a reflection of seizure activities in his brain he has suffered a number of obvious tonic-clonic or gran mal seizures and he has been on a variety of seizure medications for almost 3 years.

I also  know now that my belief in an Autism Knowledge Revolution was premature ... very, very premature.  Despite much higher rates of epileptic seizures among persons with autism than among the general population ....  as much as 30% compared to as little as 1% based on sources I have read ...  it still does not seemed to have dawned on the autism research community that "co-morbidity: which seems to imply "coincidence" to this humble layperson are aspects of one neurological disorder not two co-morbid disorders at least for those who have features of both and that the presence both of these alleged "co-morbidities" is even greater among those who, like my son, also suffer from intellectual disability.

This humble layperson strongly recommends and begs the "autism research community" to re-focus its priorities and shift away from trivial, puerile aspects of autism, stop calling it a condition, stop equating autistic with savant and start focusing more on finding causes, treatments and yes, cures, for the debilitating trifecta of autism, intellectual disability and epilepsy which this humble Dad would like to inform you is in fact ONE DISORDER not THREE separate co-morbid conditions.  I realize you can snicker and snort as professionals in the field and dismiss my comments but if you do so you are dismissing the 24/7 observations, over a period of 19+ years  of a person who loves the subject being studied and so pays close attention ... a parent. Get serious about autism, intellectual disability and epilepsy or quit pretending you care.

There are many puzzling features of autism. Hence the puzzle symbol for autism. Some of the mystery is being removed as our daily news brings us reports of new studies mapping the genetic and biological basis of autism. But even those areas are just beginning to be explored and while we are living through an Autism Knowledge Revolution there is much which remains unexplained and mysterious. Impulse control is one of those unexplained mysteries.


Even 10 years after Conor was diagnosed with Autism Disorder I am still startled by the impulses which suddenly seize Conor, and I mean seize literally, turning gentle acts of affection into potentially injurious and even dangerous acts of violence. Conor is very affectionate, tactile and observant. He likes to place his hands on either side of Dad's scruffy bearded face and study my face. But some times, suddenly, his hands dig painfully into my face. Sometimes he will grab my throat. Conor has also suddenly grabbed his mother by the hair and snapped her head and neck. Walking arm in arm downtown Fredericton, as we often do on weekends, he will occasionally grab by arm forcefully.

We have never thought for even a second that Conor intentionally tries to injure. I do not believe he has control during these instances. An impulse appears to overcome him suddenly and often is not preceded by any apparent triggering environmental stimuli. Conor simply appears physically seized by a powerful impulse.

I do not know what causes these seizure like impulses. I realize that my description of these events may sound like they are epileptic seizures and Conor's pediatrician may well confirm that lay person's guess. I know that there are many articles commenting on comorbidity of autism and epilepsy. Putting a new name on them may well be helpful in leading to other literature and understanding but I suspect that the behavior itself when it happens will always be startling and mysterious.
Posted by Unknown at 3:56 am

Harold,there have already been a lot of syndromic or single disorder causes identified for autism,intellectual disability,and seizures.The "autism knowledge revolution",as you call it,is real,but it makes up so many different diseases,that it will never make the mainstream news.This is because there are so many different diseases that have been discovered that cause this stuff.Not one single disorder for most of autism.

You are right self injury is seizures,like it was for me.I do not know what kind of tests Conor has had,but you seriously need to consider getting Conor another medical diagnosis beyond autism.If Conor has not had any medical tests since he was an infant or toddler to look into the underlying causes of his autism,that is too long ago.Science has moved on since the 1990s and 2000s.

As you are probably aware there are pretty much two types of disorders that cause autism and intellectual disability,metabolic and chromosomal.There are rare chromosomal disorders beyond Fragile X and Rett Syndrome.The best way to test for the genes for either metabolic or chromosomal disorders is by whole exome sequencing.I am having a WES to learn what kind of folate/B12 metabolism and mitochondrial disorders I have.

In Canada,you have one of the finest hospitals in the world for all of this,in McGill University,in Montreal.McGill also has one of the better whole exome labs in the world.

Canada also has TIDE.TIDE is the Treatable Intellectual Disability Endeavor,in Vancouver,BC.TIDE is the only program of its kind in the world.Quoting from their website. http://www.tidebc.org/pa/patients.html

TIDE BC is a new care and research program, based in Vancouver BC,that sees doctors and researchers working together to find ways to best support children with intellectual disability/developmental delay (ID).

ID is often associated with behavioural problems (such as hyperactivity, autism, aggressive and self injurious behaviour),epilepsy and other neurological disabilities,resulting in a great deal of stress for patients and families.
TIDE BC researchers have found that ID in some children is due to treatable genetic conditions (know as inborn errors of metabolism.These are all rare diseases and more than 80 in total.

Treatments include modified diets, supplements and drugs.Improvement of development,intellectual functioning, epilepsy control,behaviour and psychiatric disturbances,and/or neurologic deficits may be seen in some children.
TIDE BC is about the prevention and treatment of ID.

ID is a frequent and devastating condition,affecting every area of life. Worldwide, 2-3% of the population suffers from ID.In British Columbia 40,000 individuals have ID and about 1000 newborns are diagnosed with ID every year.

I am aware both Montreal and Vancouver are far away from you.Vancouver is all the way on the other side of Canada,but Canada is no different from the US,you have to travel to find doctors who are experts in these disorders.I travel from New Mexico to Arkansas to see my doctors,but it is the only way to see experts who know about this stuff.The results from treating my low functioning autism due to folate and B12 metabolism problems has been dramatic.Unheard of in an adult my age.

Please get Conor some real tests,for his sake and yours.

These were last years. https://www.youtube.com/playlist?list=PLjZMDsDRXbzeRf3BxgBrX8wQd8UTg-W7G

I have not had the time to review the videos below.


Thank you for all the went to Parent's Day. It was a great day! For ones who missed out here are the videos from the day.