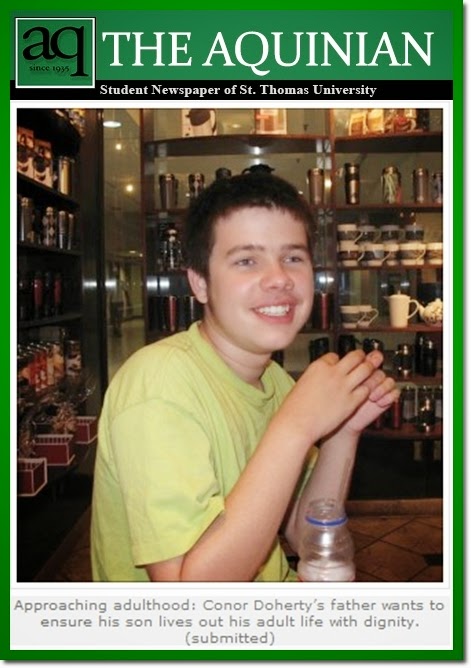 Photo of my son Conor from a few years ago submitted to the Aquinian for an article by
then Aquinian journalism student Karissa Donkin. No progress in residential care and
treatment for severely autistic adults in New Brunswick has been made since that
article or since Conor's autism diagnosis 16 years ago at age 2

A provincial election will soon be held and one of you will be premier, once again if it is Mr Alward, for the first time if it is Mr Cardy, Mr Coon or Mr Gallant.  I respectfully ask each of you to consider this request for adult autism residential care and treatment and provide a direct response.


Prior to the commencement of the official election period early autism intervention issues have already received some needed attention in a new early intervention policy which provoked considerable reaction and vigorous discussion.  What was not mentioned, what has never been mentioned, what never gets any serious attention, is the desperate need for an adult autism centre that could assist in providing providing ongoing training, leadership and supervision for adult autism group homes and assisted living arrangements and would also provided permanent residential care and treatment for those with severe autism disorders.

The significant changes that occurred in early intervention and autism education in  this province happened in direct response to strong parent advocacy primarily from parents with Autism Society New Brunswick. In our efforts we always sought credible evidence based services.  We were fortunate in having considerable guidance from Clinical Psychologist and Professor Emeritus (Psychology) Paul McDonnell Ph.D. an autism expert who has been very active in providing public education about autism in New Brunswick.

During the  2010 New Brunswick election  Dr. McDonnell was interviewed by CBC on the subject of adult autism care. The interview and analysis posted on the site are no longer available but he stated:

If a major autism centre is not developed to help enhance the group homes and provide permanent residential care and treatment for those with severe autism as Professor McDonnell has advised people with severe autism, including my wonderful, happy 18 year old son,  will continue to be sent to live  out their lives in Campbellton at the Regional Psychiatric Hospital. Apart from the  hospital character of that facility it is also located in a corner of the province 3 to 4 hours drive from most communities in New Brunswick and has no direct access to autism expertise.   The ASNB polled our members on the desirable location for an autism centre and voted for Fredericton for several reasons, the two most critical being proximity to the autism expertise developed at UNB and the Stan Cassidy Centre, and the central location providing easier access for most families to their loved ones who would reside there temporarily and in some cases permanently.

As a very interested father of an 18 year old severely autistic son I ask each of you whether if elected  your government will develop, during the next election term, the modern youth and adult autism centre described by Professor McDonnell and badly needed in New Brunswick.

Harold L Doherty
Fredericton
Posted by Unknown at 8:00 am

Isn't going to happen unless you get a group of like minded individuals, a couple of service groups together and a whack of funding from the Fed's (there was money because I know there is an "Aspie" place being built) and Province.

There is no way the "do gooders" will allow it. They are still suing here over the facilities that once existed.

Truthfully, I'm not convinced the ones fighting it truly care about those that need those very services. Better to do it alone.