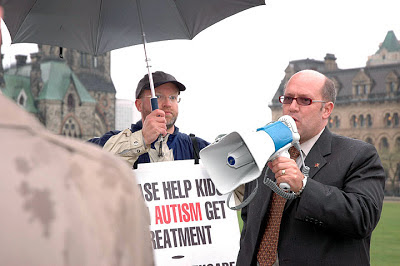 Andy Scott With A Megaphone Supporting Autism Cause with Andrew Kavchak

Canada has lost an autism champion with the passing this morning of former Fredericton MP Andy Scott.  In a telephone conversation with a friend and fellow autism advocate elsewhere in Canada I once suggested the person contact their federal Member of Parliament.  I was informed that had already been done but there would be a wait before the MP could be seen.  There was some apparent disbelief when I mentioned that I could literally walk across the street to the office of our then MP Andy Scott and if he was in he  would probably see me or any other visitor.

Andy met with representatives of the Autism Society NB on several occasions and actively pushed for a National Autism Strategy which he ultimately realized with the passage of Motion M-172.  The motion was essentially a commitment in principle with no obligations being undertaken by our federal government but it did help put autism on our national agenda and it was Andy Scott being Andy ... getting done what could get done ... with a view to moving forward further in future.  He continued to advocate for autism as demonstrated in his June 5, 2007 statement in House of Commons:

The Conservatives should move off their default position of jurisdictional excuses, show creativity and compassion and start helping these Canadians.

On a previous blog commentary about Andy I had referenced the National Autism Strategy and quoted from Tali Folkins 2003 Telegraph Journal article:

"Fredericton MP Andy Scott said Saturday he has been lobbying prime- minister-to-be Paul Martin for a federal program to help young children with autism. "I desperately want a national autism strategy - and let me just assure you that Paul Martin knows it," Mr. Scott told supporters at a party celebrating his 10th anniversary as an MP in Fredericton Saturday evening.

Early work by therapists with young autistic children, Mr. Scott said, can make a big difference in their capacity to lead fulfilling lives as adults - and can save money in the long run. But the costs of starting such early intervention programs are high and should be borne directly by Ottawa rather than each individual province, he said. "We have responses and therapies and so on that I genuinely believe can work," he said. "You're going to save millions of dollars over the lifetime of an autistic adult. If you can get in at the front end, you can make enormous progress.

"But it's very expensive, and there's not a lot of stuff being added to Medicare, generally - that's why we have catastrophic drug problems and other things," he said. "In the province of New Brunswick, P.E.I., or even Quebec or Ontario it's very, very expensive. The feds are going to have to step up to the plate." "

Andy Scott fought on behalf of autistic persons in Canada.  He did not achieve all the goals he wanted by any means but he did what was possible in the time he had. Autistic Canadians have lost a champion today.
Posted by Unknown at 11:40 am

That's a shame. There are far too few autism supporters in the world, so when we lose one, especially a fellow canadian, it really sucks.