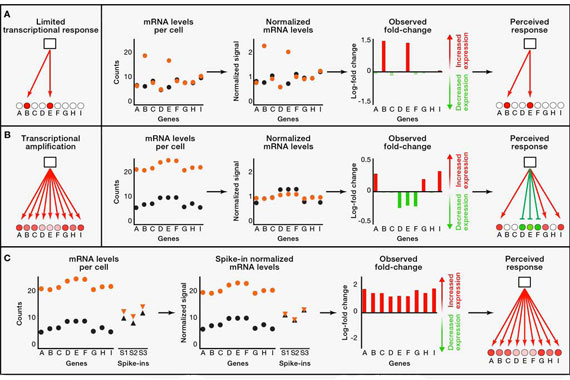 The assumption in traditional genetic expression analysis that mRNA content is similar between cells (represented by orange and black dots) does not affect the final results when the cells in fact do have equivalent mRNA content, as in Figure A. In Figure B, the cell represented by the orange dots has a significantly higher mRNA content, but when the data is normalized with the assumption that their contents are equal, the perceived response is skewed and inaccurately indicates that some of the genes are repressed (green bars). Using a standardized control, as in Figure C, eliminates the assumptions about mRNA content and presents accurate results.


Autism research has been dominated for many years by the "it's gotta be genetic" mindset that has seen autism research dollars flow overwhelming toward genetic research at the expense of substantial research of environmental factors.  This dominance has been maintained despite the failure of the autism research community to find specific genes which could be said to cause autism disorders.  Much of the recent discussion has focused on gene expression.  Now a team of researchers led by Richard Young of the Whitehead Institute has identified a major flaw in traditional genetic expression analysis.  Will this flawed analysis undermine existing autism gene expression research?

The Whitehead article by Nicole Giese Rura indicates that the flaw is serious, even shocking,  that it affects a wide range of current biological research and that it may render previous research based on the flawed assumption questionable:

“The different results we saw from different methods of gene expression analysis were shocking, and led us to reinvestigate the whole process on several platforms,” says Jakob Lovén, postdoctoral reseacher in Young’s lab and co-author of the Cell paper. “We then realized that the common assumption that cells contain similar levels of mRNA is badly flawed and can lead to serious misinterpretations, particularly with cancer cells that can have very different amounts of RNA.”

Although the researchers believe the use of RNA spike-ins should become the new standard for global gene expression analyses, questions are likely to persist about the interpretations of much prior research.

“There are over 750,000 expression datasets in public databases, and because they generally lack information about the cell numbers used in the analysis, it is unclear whether they can be re-examined in order to validate the original interpretation” says David Orlando, a scientist in the Young lab. “It may be necessary to reinvestigate some important concepts.”