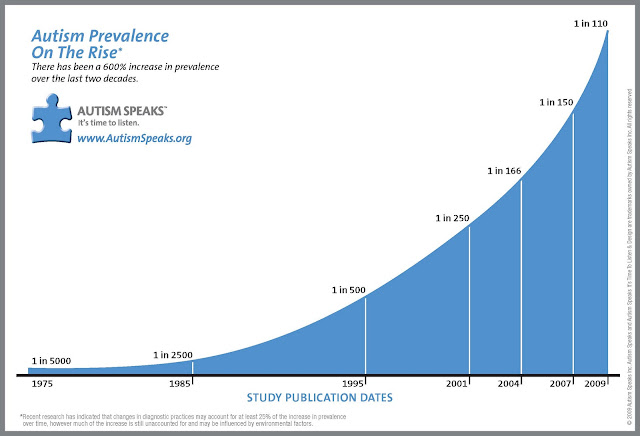 
The above statement by Autism Speaks was based on several published sources and CDC information. including articles by authors Bearman and King, who have indicated that approximately 50% (47%) of autism prevalence increases are based on factors other than social factors. Now Autism Speaks and the Centers for Disease Control and Prevention (CDC) are co-sponsoring a workshop  on February 1, 2011 to investigate the changes in autism prevalence over time in the United State:


This meeting is open to the public with pre-registration required by January 24, 2011 for US citizens and January 13 for non-US citizens."

While Autism Speaks has been puzzling at times in its efforts to "speak" about autism disorders, promoting the careers of purported autism spokespersons who question the very existence of autism as a  medical  disorder,  the importance of the above initiative can not be overstated.  For far too long the "it's gotta be genetic" mindset has held sway and prevented substantial scientific exploration of possible environmental causes or triggers of autism. Hopefully the recent US Senate hearings, official statements by the IACC acknowledging the emergence of a gene environment interaction paradigm, the CHARGE study, work by Dr. Irva Hertz-Picciotto and UN Davis M.I.N.D. researchers,  and efforts like the Autism Speaks/CDC prevalence workshop will lead to further environmental autism research; research which should have been commenced  years ago.
Posted by Unknown at 7:02 am

the statements of an organization that would fund the likes of Laurent Mottron and Alexander Plank and have John Robison, who has no formal science training on their scientific advisory board has zero credibility with me.

Jonathan I share your criticisms of Autism Speaks funding Dr Mottron's research and with respect to Robison and Plank.

What is important from my perspective is that Autism Speaks statements are not just personal statements of anyone with the AS organization. They are referenced by citations to work done by credible researchers and sources and they further a movement away from the 100% genetic model toward a gene environment interaction model and research which explores that model.

Hello, I found your blog and like it. I am a college student majoring in social work. I am currentlty looking for grad schools. I have a social work talking my senior year of internship and my social work classes. Please follow social blog at http://swktalk.blogspot.com/

Harold, in the last CDC population survey, about 23% of the children determined to have an ASD had no known records of an autism diagnosis before the CDC scientists dropped by. That speaks to a very large population of undiagnosed or misdiagnosed children. What say you?

I say nothing at all based on your unsourced, no context remark.

Click here for the CDC's summary of the 2009 ADDM report. Then scroll down to this:

Among all children meeting the ADDM ASD surveillance case definition, approximately 77% had a documented ASD classification in their records.

Like I said, 23% of the children determined to have an ASD had no record of an autism diagnosis before the CDC dropped by. That speaks to a very large population of undiagnosed or misdiagnosed children.

Can't wait for your unique context.

I recommend Gil Eyal, et al, _The Autism Matrix_, which completely explodes the idea that the incidence is rising. The argument is hard to summarize, but they make it clear that not only diagnostic substitution but also the force of parent involvement and various institutional needs have altered the diagnosis of autism. Diagnoses of autism are more prevalent; that doesn't mean more people have what we know call autism than before.

The researchers, King and Bearman in particular, cited by the CDC/Autism Speaks accounted for changes in autism definition and for social factors in reaching their conclusions that 47% of the increase can not be explained by such factors indicating the balance is real and that environmental factors are likely involved.

I think it's interesting that they now acknowledge that half of the alleged increase is not really an increase at all. Just because the other half isn't explained in their research (those numbers seem dubious: "it is estimated" how, and using what kinds of methods?) doesn't mean it can't be explained.

Diagnostic substitution and expansion and parental age are just a couple of the factors examined by Eyal, et al. You really should read the book, where they argue that the deinstutionalization of the "mentally retarded" created the need for a category such as autism, falling between mental illness and "retardation" that institutions and parents have filled.

"Autism," after all, is clearly not just one thing but many things. The fact that the DSM-IV and the forthcoming DSM-V will have very different criteria for diagnosis shows how nebulous and shifting the category can be. With that in mind, how can anyone really determine for sure whether the thing called autism (or not called it, depending on who is doing it and when) is really on the rise?

But rather than debate this, it's more useful to spend our time making life better for autistic people, particularly adults, for whom the services available are appallingly skimpy and inadequate.

Autism covers such a large spectrum. I would be interested in knowing what percent of children are non verbal and have severe autism along with Physical biomarkers such as intestinal,immunological,etc.If it is genetic, why did this crop up in our family with no history? Is it just a coincidence that he is 13 years old and since his birth autism has become "fashionable"?