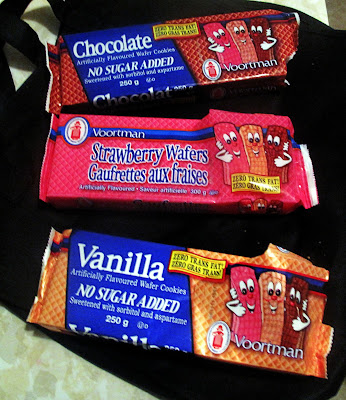 There are many generalizations made about the personalities of persons with Autism Disorders.  Some are based on solid research and direct observation ... some appear to be based on what would make a good story.  My son Conor, who has an Autistic Disorder diagnosis, assessed with profound developmental delays, is inclined to fixate on things like his favorite song ... the Canadian National Anthem.  But even though he will play our anthem endlessly on our computers Conor also likes to listen to different versions of the anthem includng playing it in French, one of Canada's two official languages, and in Spanish.
When we go shopping for groceries he often picks out peppers which he loves.  He also likes to pick out the "rainbow" packs of peppers with one green, one red, one yellow or orange.  Yesterday I was in a store with Conor picking up a few odds and ends when he suddenly walked briskly towards the other end of the store where he picked up a package of  chocolate Voortman wafers.  He then picked up a package of strawberry and vanilla Voortman wafers.  After we got home Conor wasted no time having some wafers .. one chocolate, one strawberry and one vanilla.
I bought all three packs. They will not go to waste.  And Conor had been great during our shopping.  As the strern Dad who lays down the law and is not, like his mother, wrapped around Conor's little finger (just kidding) I wanted to give him a treat.  I also wanted to reward his independence. Sometimes in the stores he can be a bit clingy but when he saw the wafers .... boom ... he was gone.
There is no great autism generalization painted by this story.  It is just Conor who is autistic and who likes variety in his music, in his foods, and in his socks (he often likes to wear one white and one black sock). One of his great strengths through the years has been his ability to transition smoothly from one therapist and teacher aide to another.  His preference for variety may be a part of that strength. Only he knows for sure.
Posted by Unknown at 7:30 am

This is great to hear about, Harold. Mind you, at his size, Conor "walking briskly" anywhere, would not be a guy I would want to discourage! (Never stand between a man and his cookies!)

This is a great reminder to give new things a try now and then, perhaps even more often then that.
:)

So does Khaled! Yeah its just a personality thing eh? Variety and novelty.

actually harold this is leading me to have a question.

my son and yours both seem to be adaptable (to an extent)beyond what is considered the norm for autism. while my son is fairly normal functioning (tho non verbal) and yours on the learning disabilities end it is lending me to ask a question. Is perhaps our attachment to the idea that autistics are extremely one tracked a bit off the mark?