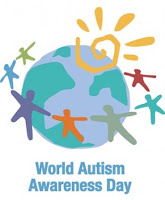 On  World Autism Awareness Day, April 2, remember that autism is a disorder or more accurately a group of disorders.  It is not just a different way of thinking, a way of life or a political career path for a media savvy high functioning University student with little  exposure to, or actual knowledge of the realities of  severe Autistic Disorder.
There are indeed many very high functioning persons with Aspergers and some high functioning persons with other "autism" disorders.  There are also many persons with Autistic Disorder and Intellectual Disability and others who are generally very low functioning, who will self injure, be at greater risk from the ordinary dangers of daily life, remain unemployed throughout their lives and live in the care of others in a variety of residential and institutional settings. These are facts.
"Autism", or what is described as autism varies.  Autistic Disorder is currently shown in the DSM IV as one of the Pervasive Developmental Disorders:

Delays or abnormal functioning in at least one of the following areas, with onset prior to age 3 years: (1) social interaction, (2) language as used in social communication, or (3) symbolic or imaginative play.

The disturbance is not better accounted for by Rett's Disorder or Childhood Disintegrative Disorder.

As currently described Autistic Disorder is exactly what it says. It is a disorder.  Not a social movement, not a culture and not just a different way of looking at the world.

On World Autism Awareness Day please be aware that autism is a disorder, one that impairs and restricts the lives of many persons who carry the diagnosis of Autistic Disorder and to some extent those that are diagnosed with other Pervasive Developmental Disorders.