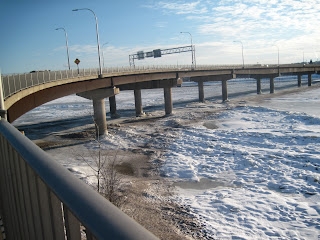 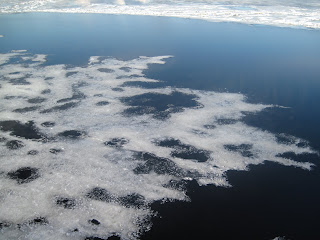 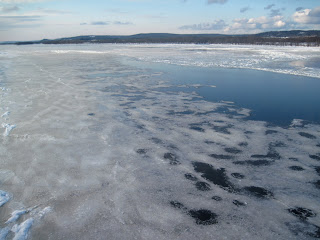 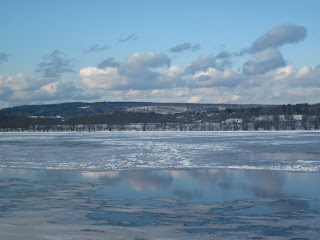 Yesterday I suffered a concussion. While taking pictures I slipped and fell and was knocked out for a few minutes on the Westmorland Street Bridge in Fredericton . I had received a very good whack on the back of my head.  On coming to I immediately checked ... my camera was OK. After walking further to the Second Cup  for a coffee I called home and Heather recommended I get checked out at the DECH, the Doctor Everett Chalmers Hospital, which I did. The pictures above are of the WS Bridge and some of the pictures   I took immediately before my fall.

Today, with a slight headache,  I was thinking about the incident and while I was knocked out I don't think I suffered any great damage. Another person though, not blessed with such a thick skull, might have suffered more serious injuries.    My fall on the bridge makes me think again of the view that autism is purely genetic, the view that has dominated autism research funding models and neurodiversity  autism ideology over the past decade. It is a view which excludes any reference to external, environmental factors in causing or triggering autism.  Autism is inherited, end of story.

According to the "it's gotta be genetic" mindset  no external factors be they vaccine ingredients, power plant emissions, drinking water contaminants, plastics components, or the ingredients in the children's toys and jewelry that are all around us could possibly be involved in causing autism disorders. This grand assumption flies in the face of the fact that in some cases an identical twin will have an autism disorder while the other does not. It flies in the face of the fact that  people are genetically and biologically different in their ability to absorb external shocks.  One guy can take a punch, even a knockout,  and get back up and fight, or play hockey or football, another is out of the game. One guy can slip on ice and be rendered unconscious but get up and be none the worse for wear beyond a good headache the next day. Another might not recover so well.   One child has a preexisting mitochondrial disorder that renders her vulnerable to vaccine delivered shocks, another does not.

That "it's gotta be genetic view" of autism identified by Teresa Binstock 10 years ago is slowly giving way to the more likely and common sense based view that autism, like most conditions in life, good or bad,  results from the interaction of genetic and  environmental factors.  Even the IACC and Dr. Tom Insel are grudgingly beginning to acknowledge that likelihood and to acknowledge the need for increased funding of environmentally focused autism research.

We have reason to hope that the "it's gotta be genetic", frozen view of autism  will soon  be thrown off the research funding bridge ... or at least suffer a serious slip and fall. Hopefully 2010 will be the year that   environmentally focused autism research gets up on its feet and we begin to understand all the factors that cause or trigger autism disorders.

If autism was purely genetic that when one identical twin has autism the other will always have it. But that isn't the case.

If you read the interview Insel recently did, immediately post-official-release of the CDC numbers, it may seem that Insel is anything but 'grudging' in his dismissal of the genetics-only view.

I blogged it here, if you are looking for the link: http://soaringhorse.blogspot.com/2009/12/insel-backed-by-data-declares-new-goals.html

The data recently released by CDC do not support the genetics only hypothesis, and he makes that point forcefully to a co-founder of Huffington Post, in an interview to be published on an Autism-Advocacy website, which focuses on things like vaccine injury.

This is not grudging. Like any human, he has, and has had, an opionion on this the whole time. The bloodsport politics of Autism research incent against the unguarded distribution of ones opinion, until such time as the data precisely support your point of view.

The Insel interview, to me, was a PR activity designed to clue the world in that, for at least Insel, that time has now come.

Just IMHO. Other opinions, including yours, may vary.

Hope all is well stateside with you and yours. I think my thick skull prevented any serious harm from my fall.

Actually I agree with your assessment of "the interview". I meant it in the long view sense that the acknowledgement of an environmental component in autism causation was a long time coming.

Simon Baron Cohen, with the same reasoning as Stephanie Lynn Keil sets out in her comment about identical twins, has stated publicly at least three times over the past years, that there has to be an environmental component to autism. Teresa Binstock cautioned against the "it's gotta be genetic" mind freeze a decade ago.

Natasha Richardson barely banged her head on the ground, didn't pass out and that fall killed her... as you said... all depends on the person.

I hope you are feeling better soon too Harold.

I totally agree and understand what you are saying in this post.

In my son's case (he is now 44), there is likely a genetic link to start with but also brain injury at birth -- both from a serious hematoma on the frontal lobe from trying to enter the world, but being too large to do so, and a brief period once he was born where there was a lack of oxygen. Then, of course, there were the couple of bad falls and concussions as a toddler because if I let him out of my sight for even a moment....

So, the causes of ones autism symptoms will likely be from more than one source.

Harold keep up the hard work.

Your opinion on autism related issues may have struck a cord or two with many....but your ongoing perseverance will forever fuel the passion and love many parents have for their children with autism. The rest is unimportant.

Continue your ongoing efforts....for they are surely appreciated by many.


Hoping you feel better soon...wishing you and your family a great 2010 Happy New Year.

Sorry to hear about your fall. Hope you are feeling better and hopefully you will recover and not have any permanent damage.

Here is some additional info on the topic of autism and genetics. It was written by our genetic counselor. http://www.accessdna.com/condition/Autism_Spectrum_Disorders/49.