Autism, Fevers and the Locus Coeruleus - Autism Might Be Reversible 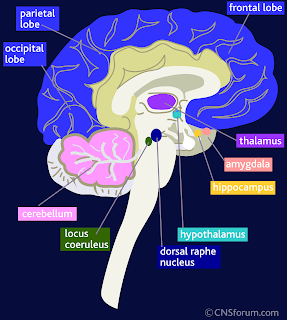 A new theory advanced by scientists at the Albert Einstein College of Medicine of Yeshiva University suggests that autism may be reversible. Science Daily reports that the brains of persons with autism are structurally normal but dysregulated:

The central tenet of the theory, published in the March issue of Brain Research Reviews, is that autism is a developmental disorder caused by impaired regulation of the locus coeruleus, a bundle of neurons in the brain stem that processes sensory signals from all areas of the body. ......... "On a positive note, we are talking about a brain region that is not irrevocably altered. It gives us hope that, with novel therapies, we will eventually be able to help people with autism," says theory co-author Mark F. Mehler, M.D., chairman of neurology and director of the Institute for Brain Disorders and Neural Regeneration at Einstein.
According to the Science Daily article the locus coeruleus is involved in producing fever and in controlling a number of complex behaviors such as attentional focusing. It activates higher order brain centers involved in cognitive tasks. There have been reports of autistic persons speaking better during periods of fever. I have commented before that I believed I saw such a result in my son Conor. Dr. Mehler believes that future treatment using drugs that target this region of the brain may be able to help people with autism:

"If the locus coeruleus is impaired in autism, it is probably because tens or hundreds, maybe even thousands, of genes are dysregulated in subtle and complex ways," says Dr. Mehler. "The only way you can reverse this process is with epigenetic therapies, which, we are beginning to learn, have the ability to coordinate very large integrated gene networks."

"The message here is one of hope but also one of caution," Dr. Mehler adds. "You can't take a complex neuropsychiatric disease that has escaped our understanding for 50 years and in one fell swoop have a therapy that is going to reverse it — that's folly. On the other hand, we now have clues to the neurobiology, the genetics, and the epigenetics of autism. To move forward, we need to invest more money in basic science to look at the genome and the epigenome in a more focused way."

Dr. Mehler advises proceding with hope and caution. Sound advice. The call for investment in more scientific research in this area should not be ignored. In the meantime autistic persons, parents and professionals seeking effective autism treatments should read the Science Daily article and the study reported in the March issue of Brain Research Reviews.

The brain that changes itself. It has very little to do with autism except to touch on the Arrowsmith school for learning disabilities in TO.

BUT, it talks about neuroplasicity. Something a believe in 100% b/c I've seen it with my own boys.

Maybe one day... we'll be able to straigten some of the kinks in the brain with a series of therapies... in the mean time, I'm going to keep trying on my own.

farmwifetwo...I read the book and am using alot of ideas from it to rehab my daughter whose stroke and subsequent hydrocephalus left her severely brain and physically damaged. My daughter was given NO HOPE of recovery whatsoever...the best case scenario was death in the first year or vegetable. She is actually now fully conscious, understands everything around her and can write, read, and is suddenly starting to understand math (just this past week!) After 9 years of rehab, I am sold...the brain DOES change...but you have to be at it all the time.