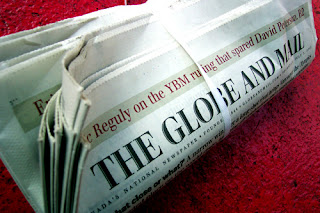 The autism world is buzzing today over a Glove and Mail article which discusses in a frank and straightfoward manner the societal costs, estimated at $3.2 million per person of caring for autistic adults. The costs are derived from the inability of many adults to work and care for themselves. These are some of the unpleasant realities that the rose coloured glasses brigade do not want discussed. But now government is being hit in the face with these realities. The Canadian Senate recently issued a report, a very flawed report, which warned that Canada would have to pay now or pay later for the costs of autism treatmnet and care. That part of the Senate Report at least was right if action is not taken to ensure that proper evidence based treatment for autism is not funded society ends up paying much more down the road.

It is not like government was not warned. In Canada the courageous parents who litigated the Connor Auton case started telling government over a decade ago that the financial burden to society down the road would be tremendous if early ABA intervention was not provided intensively right away and funded. Government chose to fight and resist all the way to the Supreme Court of Canada. Along the way government received unexpected help form such sources as Psychiatrist Laurent Mottron an alleged autism expert who publishes reports on dozens of autism cases a year, almost all involving high functioning autistics and Asperger's Persons, almost none involving the low functioning autistic persons who require such expensive intensive residential care and treatment as adults.

In New Brunswick parents were subjected initially to a different response from government. Here we were asked to wait dutifully while an Inter Departmental Committee of Health, Family and Education civil servants along with hand picked "stakeholder" representatives met to assess what services were available specifically for autism needs in New Brunswick. The report and its recommendations were submitted to government where it went unread by the lead Minister Elvy Robichaud for 10 months, by his own public admission. The report's recommendation were timid and only contained a recommendation for evidence based interventions because a local Fredericton activist group called FACE kicked up a fuss. It took another year after the reports release before the government committed on paper to fund pre-school interventions for autistic children. Only now are Teachers and Teachers Assistants being trained in New Brunswick at the excellent UNB-CEL Autism Intervention Training Program.

The cost of government foot dragging in New Brunswick and across Canada on autism issues is now becoming clearer. In New Brunswick residential care and treatment for autistic youths and adults is virtually non-existent. Essentially our more difficult cases are shipped out of province, sometimes out of Canada, to seek treatment. Residential care is essentially custodial care for many autistic youths and adults and they sometimes end up charged with assault when friction arises between untrained residential care workers and autistic residents.

Government was told this day was coming. But it is not down the road as the Senate indicates although the problem will undoubtedly get even bigger down the road. The future, the unpleasant future is now in New Brunswick and much of Canada for the substantial numbers of autistic adults living little more than a custodial existence; cared for by untrained staff and lacking in appropriate medical care.

Because few adults with the disorder can work, the economic costs continue

Each child diagnosed with autism will accrue about $3.2-million (U.S.) in medical and non-medical costs over his or her lifetime, according to a new study.

The most expensive components are lost productivity and adult care, not medical costs and behavioural therapies that so many parents crave for their children, the research shows.

"Although autism is typically thought of as a disorder of childhood, its costs can be felt well into adulthood," said Michael Ganz, an adjunct professor in the department of society, human development and health at Harvard University in Cambridge, Mass., and the lead author."
Posted by Unknown at 3:43 pm