Dad Scores A Goal ... With A Big Assist From Tim Hortons, Eh! 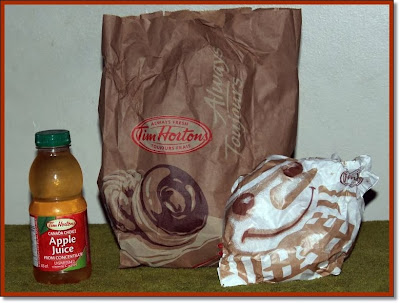 I felt like a bit of a superstar on the Conor page this morning.  Yesterday we took Conor to see "Frozen" in the mall theater and we got a few things done but tried to avoid going out on the roads with some of the frantic Christmas driving going on. We overlooked a few basics in restocking the fridge.  Conor gets up early at 6 am sharp EVERY day without fail so there was no time to run out for more groceries. Our neighborhood Tim Hortons was open though and it is close enough for a pleasant early morning walk

It may seem small and inconsequential to many but with Conor's autism challenges nothing is taken for granted. This morning as he made smacking noises while clearly enjoying his bagel I was a very happy Dad. I had scored a big goal with a big assist from Tim Hortons.
Posted by Unknown at 8:51 am

Mine prefers an old fashioned plain donut. I think it's due to the lack of greasy feeling since it doesn't have icing.

Always a good treat in our house.