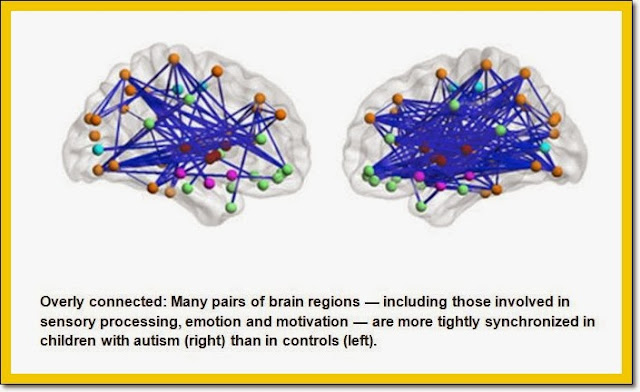 In the picture above SFARI presents news of two "autism" studies which purport to find that brains of persons with "autism" are overly connected as compared to those in control groups. In fact both studies intentionally and expressly excluded persons with autism and intellectual disability, approximately 50% of those with autism spectrum disorders according to the World Health Organization, from their studies. Both the studies and the SFARI news commentary describe the results as descriptive of "autism" brains rather than "high functioning autism" brains.  The studies, and the SFARI news commentary, continue the misrepresentation of high functioning autism as being representative of  all autism disorders.

In a 2008 posting on this site, Autism's Outcasts, I commented on and questioned the exclusion of low functioning autistics, those with intellectual disabilities, from media representations of autism disorders and from "autism" research. Unfortunately, these trends have continued unabated.  While the mainstream media is driven in this direction by both ignorance and profit generating high functioning representations of autism in shows such as the Big Bang Theory it is frightening to see researchers, and autism research organizations like SFARI, cling routinely to the premise that "autism research" should focus on high functioning autism exclusive of intellectual disability, pure autism,  as questioned by Giacomo Vivanti and his colleagues in Intellectual Development in Autism Spectrum Disorders: New Insights from Longitudinal Studies:

"we argue that the practice of excluding children with ID in ASD research to study “pure autism unconfounded by ID” is ill considered, just as studying the risk of cardiovascular events in individuals who are slightly overweight, or who have mild presentation of hypertension, would not be informative on the most relevant aspects affecting the outcomes of individuals with those conditions."

"Two of the new studies looked at resting brains and controlled for head movement. Both found that the brains of children and teens with autism show overconnectivity. In the first, published 14 November in Cell Reports, Müller and his colleagues used resting-state functional magnetic resonance imaging (fMRI) to assess short-range brain connectivity in 29 high-functioning children and adolescents with autism and 29 controls. All participants were between the ages of 8 and 18, with intelligence quotients (IQs) above 70. .......... A second study, published in the same issue of Cell Reports, turned up even more extensive evidence of overconnectivity in young children, who are typically neglected in connectivity research2. The researchers assembled three independent groups of children: 40 in California, 40 in Washington, D.C. and 30 in New York, all between the ages of 7 and 13. Each group had equal numbers of children with autism — all with IQs above 70 — and typically developing controls.”

These two studies are presented by the SFARI commentary as representative of autism generally even though persons with autism and intellectual disability were intentionally excluded from both studies.  The studies, and SFARI, also believe without any foundation that there is such as thing as "an  autism brain" and that such "autism brains" are characterized by overconnectivity.  It is, in my humble opinion, intellectually dishonest to state that there is one model of autism brain representative of all persons with autism disorders and that such brains can be described and understood by excluding from studies the 50% of persons with autism disorders, as estimated by the World Health Organization, who also suffer from  an intellectual disability.

There are consequences to the exclusion of persons with autism and intellectual disability from "autism" studies as noted by Vivanti and his colleagues:


"As the poor outcomes associated with the presence of ID in ASD result in large human and societal costs, it is important that future research systematically investigate the risk and protective factors associated with the development of ID in ASD. Indeed, excluding individuals with ID from research in ASD only renders more difficult the ultimate goal of fostering positive outcomes for individuals with ASD. "

The article at the link is actually pretty good.A good bit is about the real debate going on among autism researchers if ID should be considered part of autism or not.This all goes back to the DSM,and the terribly wrong and unjust model of autism it has promoted since the 1950s.This is what doctors and researchers have been taught to see autism as.

A growing number of doctors and researchers want to dump the DSM,and adopt a new model for autism.

One big problem I have with the DSM definition,is there are a growing number of conditions,cerebral folate deficiency,PANDAS and related conditions,autism caused by food allergies,where the autism goes away,once what should be a "comorbid" condition is treated.If the autism were the main condition,this should not be the case.

I don't think research will be truly fair,until we adopt a new model of autism.Something like this.This quote from the article is something I have thought myself,but have not seen anybody say before.

"If the notion that ID is a comorbid feature of ASD is correct, then measures of ASD severity and of cognitive abilities should be independent in the ASD population, so that a child could have mild ASD with severe ID, or severe ASD with mild ID."This isn't the case,and it just proves the DSM that has been used to diagnose autism all along is not only wrong,but does favor the higher functioning.This bias towards the higher functioning will not end until we completely scrap the DSM model of autism.

The WHO says 50% of those with autism have ID.This article cites a 2011 (!) article that says it's about two thirds.That's quite a difference,who's right here?

This reflects Autism's status as Dx-du-jour. There is a lot of sloppy research out there, with the sloppiness worsened by the DSM's muddle. Finally, one wonders (but not enough to look it up...) what the connectivity in any and all CHILDREN's brains looks like. Isn't there a certain degree of neural plasticity in the young?