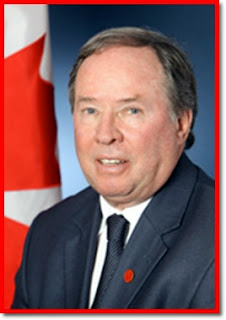 Laverne Stewart of Fredericton's Daily Gleaner reports (September 24, 2013) that National autism advocate Senator  Jim Munson, shown left in his Parliament of Canada photo,  is frustrated, that after years of working to secure a national autism disorder spectrum strategy, Munson said the federal government has done little to address Canada's national autism crisis:
"In a phone interview with The Daily Gleaner, he said the federal government has started to look at what approach each province is taking to address autism.
“They’re different all across the county,” he said.
Munson said people across Canada need to keep pushing the federal and provincial governments for a better approach to addressing the needs of autistic individuals and their families.
“Autism has no borders. It doesn’t. Not in this country or any other country in the world. We live in this world where we say it is a provincial responsibility. It is not. It’s Canada’s responsibility … It is scandalous. We’re in crisis.”"
Senator Munson, is widely respect for his work on behalf of autism disorders  and he has done much over the past 10 years to keep autism on the national agenda, a major challenge since most of that time has seen the Harper government act in opposition to any effective National Autism Strategy.  Even with an Edmonton MP, Mike Lake,  who is clearly a  dedicated father to his own son with an autism disorder the government of  Harper and Lake have taken absolutely NO action to help autistic Canadians in need of effective early intervention, effective learning intervention for school or modern residential care , with autism trained staff, for the many adult Canadians with severe autism disorders who will require such care.
Senator Munson is very diplomatic.   With respect,  I do not agree that Ottawa has done little to address Canada's autism crisis.  The Harper government has in fact worsened that crisis with it's official opposition to a National Autism Strategy, an opposition so ferocious that even Edmonton MP and dedicated Autism Dad Mike Lake voted against Shawn Murphy's private member's motion that would have ensured access to effective, evidence based intervention for autistic children under our national health care plan.   The Harper government's opposition to an effective national autism strategy is so intense that it even cancelled a scheduled national autism strategy conference scheduled for Ottawa several years ago at which community autism representatives were expected to attend.  The event was rescheduled and the "community" autism representatives were hand picked to exclude any prominent autism advocates for a National Autism Strategy.
Senator Munson has had the interests of autistic children and adults at heart for many years. Unfortunately for autistic children and adults, like my son, the Senator's  frustration is doomed to continue as long as Stephen Harper rules in Ottawa.
Posted by Unknown at 3:27 am