Conor Countdown Continues In Support of FLEXIBLE, EVIDENCE BASED Inclusion 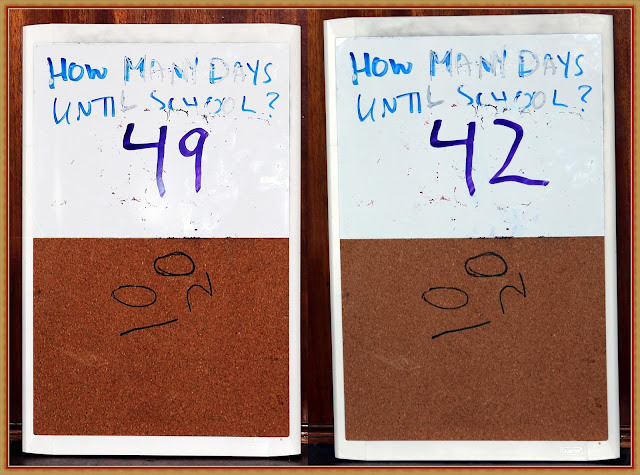 The Conor Countdown continues, as Conor gets up each day at 6 am and changes the number reflecting the number of days until school resumes.

My son Conor, and his autism disorder disability,  have been well accommodated in schools here in Fredericton, New Brunswick, Canada.  He has benefited both from the assistance of education aides and resource teachers trained in the UNB-CEL Autism program and by placement, at our request, outside the regular classroom for his ABA based instruction.

His placement is not segregation in the sense of the racial segregation which once prevailed in the American south.  His placement reflects the fact that Conor's autism based sensory sensitivities and need for predictable routine, coupled with his individualized learning style and instruction methods require a quieter learning environment.

In the regular classroom, early in Conor's education,  he bit his hands every single day until he was removed to a quieter location where the self injurious biting ceased. Now in high school his individualized instruction continues but he has many, many opportunities for socialization at the Leo Hayes High School Resource Centre with other students with special needs, in common areas and activities like school outings, visits to the cafeteria and ... Conor's favorite by far ... in weekly visits to the Nashwaaksis Middle School swimming pool.

Conor loves his flexible, evidence based schooling so much that the summer, with no school, is a difficult time for him.  We do our best to help him during this period and Conor does his best to help himself.  One of the activities that helps him get through the summer break is the "Countdown".  Each day, every day, at 6 am Conor gets up and changes the number on his board under the question "How Many Days Until School?"  He can see the number getting smaller each day, he can take steps each day to make the number smaller reducing his anxiety and frustration.

Conor's self injurious biting while placed in the regular classroom was a vote against the extreme, non evidence based "regular classroom for all students" philosophy. Now, during the school year Conor packs his lunch bag every night and puts it in front of the side door to the driveway and Dad's car. During the summer Conor does his "How many days until School" countdown.  Both activities are strong compelling statements from Conor in support of the flexible, evidence based, inclusive education he has received at school since being removed from the regular classroom.
Posted by Unknown at 4:40 am

Anonymous 7:36 am in New Jersey, if you want to ask a detailed question about my son why don't you give me your name and email address and we can discuss. Harold L Doherty