It is increasingly difficult to be polite when discussing the lack of compassion demonstrated by NB governments towards New Brunswick's adult autism population. As the letter from Gary Mayes to the Telegraph Journal in 2005 demonstrates, after two years, at that time, of flat refusals to act, the refusal of our governments to address adult autism care in a systemic, conscientious fashion over the last decade is fixed in stone: 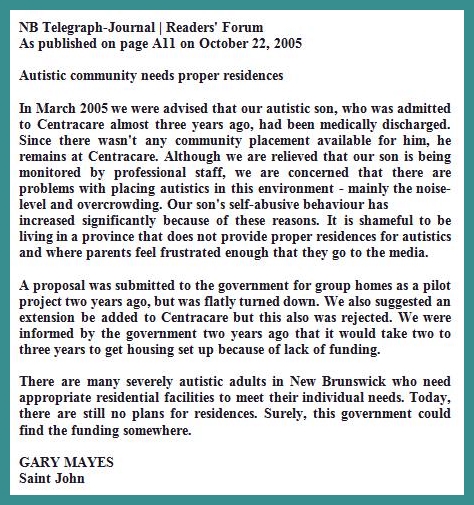 Today New Brunswick still needs appropriate residential facilities to meet the individual needs of NB adults with autism, particularly those with severe symptoms including sensory challenges, obsessive routines and self injurious behaviors.  An adult autism care network with a center for permanent care and treatment for those most severely affected by autism disorders and expertise available for autism group home care around the province was proposed by UNB Professor Emeritus (Psychology), clinical psychologist and autism expert Paul McDonnell in 2010.  That proposal would also build on the success enjoyed by New Brunswick in early intervention and school services; areas which also need improvement but have been recognized as models worthy of emulation.

The McDonnell  proposal has received no serious consideration from NB's current government. That was made clear to me in a pre-Christmas 2012 chat at Kings Place with Ken Ross, Assistant Deputy Minister of Health.  When I raised autism issues for discussion with Mr. Ross and indicated ASNB's interest in adult autism care with him he diverted the discussion by asking questions about ASNB's organizational status even though ASNB is the most transparent disability advocacy group in NB, is totally conflict of interest free in that it receives no financial subsidy from the government, and operates, unlike another major community organization, at arms length from government.  While not being financially indebted to the government ASNB has consistently invited government and party leaders to ASNB meetings, an offer which has been recently been taken up by EECD Minister Jody Carr and NDP Party Leader Dominic Cardy.

Mr. Ross's attempt to change the conversation was exactly the same tack he took over a decade ago when ASNB was advocating for evidence based early intervention for New Brunswick's autistic children.  Ultimately the Department of Health transferred responsibility for providing early intervention to the Department of Family and Community Services as it was then called even though autism disorders are, and were, recognized as mental health disorders by the Diagnostic and Statistical Manual of Mental Health Disorders versions, IV and 5.  We did ultimately get back to adult care in our pre-Christmas discussion but there was no indication from Mr. Ross that he was even aware of the network proposal  suggested by Dr. McDonnell, a proposal which was consistent with positions taken over the past 10 years in meetings with and submissions to the Province of New Brunswick.  Ken Ross is not an elected official but he is a key autism adviser to New Brunswick ministers of health over more than a decade.   His lack of professed awareness of the ASNB or McDonnell positions is a strong indication that our elected officials have either ignored or outright rejected the proposed modern autism adult care network whether they were, or were not, acting on Mr. Ross's advice in doing so.

While NB has done much to help autistic children and students our governments  simply refuse to seriously address the needs of  autistic adults particularly those with severe challenges who must live out their adult lives in the psychiatric hospital in Campbellton.   It is difficult to avoid the conclusion that, when it comes to autistic adults in need of residential care and treatment, our governments, and/or some of their key advisers,  simply do not care.
Posted by Unknown at 5:53 am

Harold,
I have wracked my brain in Ontario trying to think of what will change this course of absolute disaster. It is no different here, nor any other province. I know you recall the SCC and while that was regarding a different situation do you remember the number of both provincial and FEDERAL lawyers on the left side of the room. I would love for you to consider posting a presentation on legislation on disability that was proposed in Ontario Bill 118 years ago. I as head of FEAT of Ontario discussed why it would not help "children" with autism, but it certainly silently embraced the adult community, but by using the HANDSARD RECORDS I was able to show HOW DEEPLY ROOTED THE DISCRIMINATION was against children with autism by Government itself. I'll wait to hear from you on fb if I can submit it to your blog it was their own words and I can assure you the question you pose "do they simply not care" is already answered.
With respect,
Nora Whitney
E.D.FEAT of Ontario

Nora, you have made huge contributions to autism advocacy in Ontario and Canada over the last 10-15 years. I would be happy to read your submission. My email address is autismrealitynb@gmail.com